Keep calm, stocks sufficient for everyone if no panic buying says supermarkets in Miri 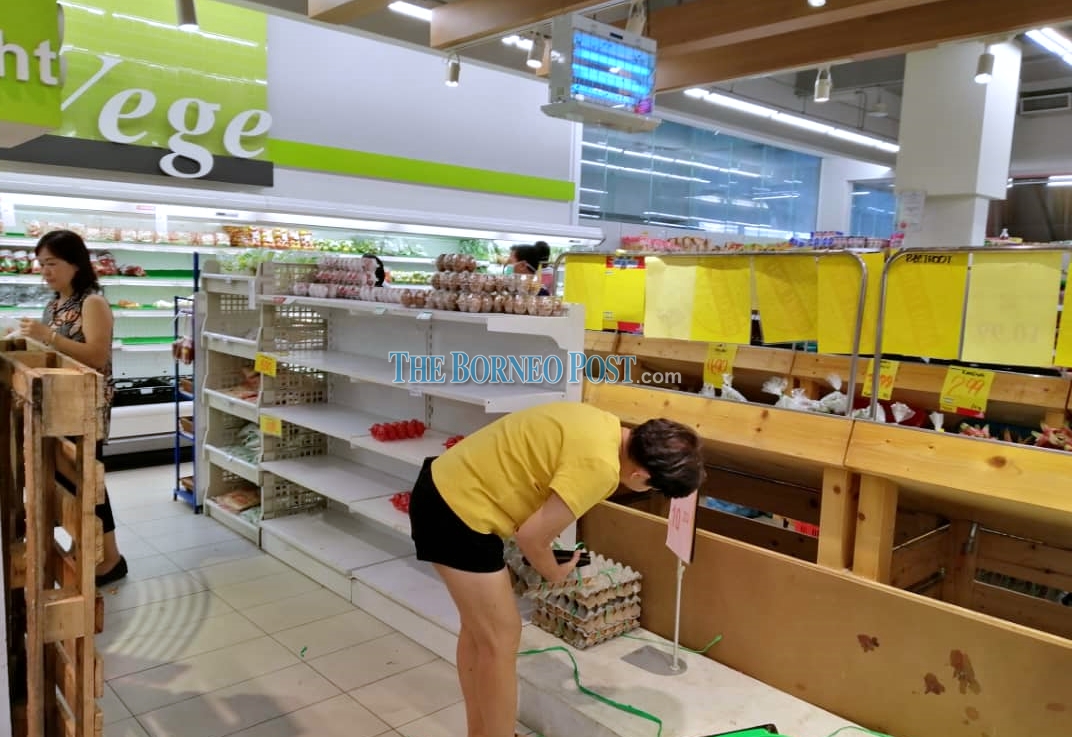 Empty shelves seen at Ah Hong Grocer, as staff rush to replenish stocks, which they assured were enough if people were to stop panic buying.

MIRI: Members of the public are urged to stay calm after some supermarkets here experienced a spate of panic buying due to the recent movement control order announced by the government last night.

During a ground check at Ah Hong Grocery here, one of the workers said the shelves were visibly emptier as customers had rushed to fill their trolleys after the announcement by Prime Minister Tan Sri Muhyiddin Yassin.

“We are working endlessly to replenish stocks, with the items that we have restocked including vegetables, poultry, and other packaged foods,” said the staff member, who wished to remain unnamed.

One of the customers, whom The Borneo Post approached during the ground check, said that he bought some of the food items, because he was “just following what others are doing”.

“I saw other customer buying food products, so I panicked and bought some too,” said the customer who was there with his wife.

At Boulevard Hypermarket, the situation was calmer, with fewer shoppers.

A shopper who only wanted to be identified as Nurul said she stayed at Long Miri, and had only come down to buy essential items, which was part of her monthly routine.

“My place is quite remote so I usually come down once a month. I didn’t do any panic buying. Just buying essential items.”

Yap, a family man in his 50s, said he bought mostly food items because he was not sure whether coffeeshops would still be operating.

“I was given the impression that it would be like a ‘lockdown’, so I bought rice and other essential food products, just in case.”

A check with the staff of hypermarket revealed that they had sufficient stock, with no panic buying as yet.

In a press conference yesterday, the prime minister added that the Agriculture and Food Industries Ministry had been asked to monitor the situation on the ground.

“As of today (yesterday), the ministry has not indicated that food is running out. We will also ensure that people have access to all the essentials like vegetables, fruits and fish at the outlets which will stay open,” Muhyiddin said.

The post Keep calm, stocks sufficient for everyone if no panic buying says supermarkets in Miri appeared first on Borneo Post Online.