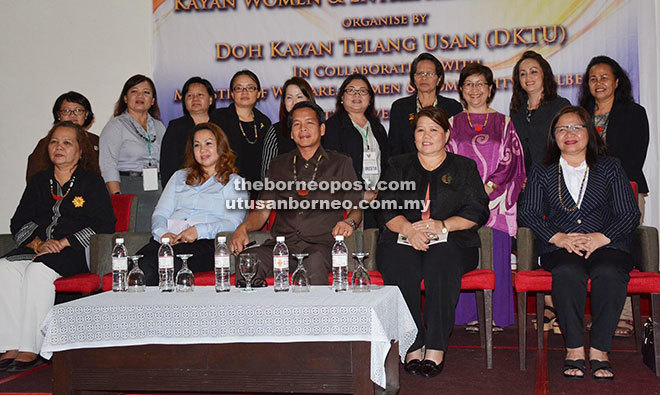 MIRI: The newly registered Doh Kayan (Kayan Women) Telang Usan (DKTU) association has been called to help uplift the standard of living of their community.

In making this call, Telang Usan assemblyman Dennis Ngau said DKTU being an association which focuses on the roles of women in the community should be an agent of change.

DKBU applied for its registration with the Registrar of Society (ROS) in October and was approved on Nov 11 with Kayan paramount chief Temenggong Elizabeth Ding as its president.

“Use this association to help our women especially the Kayans in our constituency in Telang Usan.

“Be progressive, active and do not just sit and wait. Work hard and grab any opportunities to help develop and strengthen the power of our women among other communities especially in the state,” he said when officiating at the closing ceremony of the inaugural “Empowering Kayan Women and Entrepreneurship Seminar” held at a leading hotel here on Saturday night.

Meanwhile, Elizabeth in her speech said she was honoured and thankful that DKTU is now a registered association and hoped it would become a platform for Kayan women to discuss and find ways to improve the livelihood of the community through the roles played by the women.

She said development should be made in a holistic way to include education, social and economy while at the same lifting the standard of the Kayan women so it too can stand on par with other women from other ethnic group in the society.

At the function, Dennis announced grants totalling RM20,000 from his Minor Rural Project (MRP) to DKTU.

The seminar was attended by some 200 Kayan women and it was organised by DKTU in collaboration with the Ministry of Welfare, Women and Community Wellbeing.