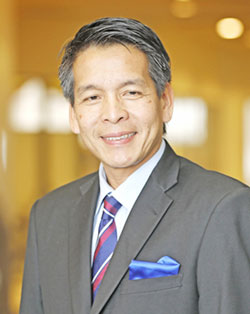 MIRI: The plight of a few students from a village near Pakan, who were forced to go to a jungle hilltop so that they would be able to follow online lessons, signifies the ongoing hardship faced by the people in many rural pockets in Sarawak.

The news, which was highlighted on the front page of yesterday’s issue of The Borneo Post, caught the attention of Telang Usan assemblyman Dennis Ngau.

When contacted yesterday, he said such scenario was common, especially in his constituency where many villages and settlements were still without telephone and Internet connectivity.

“In fact, that place pictured on the front page of The Borneo Post, is common to us.

“I had experienced it myself – I had to stand at the exact spot; otherwise the signal would go off,” he said.

Dennis said out of 84 longhouses and settlements across his constituency, only 10 villages and a town, which is Long Lama, had telecommunication towers.

Dennis also pointed out that he had received many requests from many village headmen for their areas to have telecommunication towers and in this regard, he believed that other elected representatives had received similar requests from their constituents as well.

“If I may suggest the relevant ministries or agencies to go to the ground and gain feedback from the elected representatives, in order for them to get to know the real issues and problems faced by the constituents.

“It is indeed very sad when the photo of people having to go to the jungle hilltop just to get better Internet or phone connectivity, being made viral on social media, and published on newspapers,” he said.

Dennis acknowledged that the provision of good telecommunication and Internet services would require a huge budget, but he also believed that the state leaders were equally concerned with people not having direct access to these modern-day needs.

“They (Sarawak government) will be taking the matter seriously,” he added.