Nobody does Valentine’s Day quite like the Japanese more specifically, Japanese women. While the observance of Valentine’s Day may arouse opposition in Middle Eastern countries, where critics complain the practice represents a decadent Western custom, it is quite popular in Japan, and they twist it around to fit in their tradition.

February 14 - the Japanese day of chocolates

In the Land of Rising Sun, every Feb. 14 has been set aside as the ‘Japanese day of chocolates’, which generally involves girls and women handing out presents, usually chocolates, to the men in their lives as a show of love, affection or respect. That’s right, in the West men are expected to lavish their women with gifts during Valentines Day, in Japan however, the men receive it from their female counterparts.

A sleek marketing campaign conjured up by Japanese confectioner firm Marys chocolate reportedly started the custom in the 1950s. Fifty years later, the holiday has morphed into an all out celebration of chocolate in Japan, driving forward a $2.5 billion industry for retailers.

“It’s almost like a fifth season. It’s that big,” said Adam Kassab, a professor at Globis University in Tokyo. “The marketing people are very clever because they linked giving chocolates with a very core, Japanese cultural belief or value which is showing appreciation or social obligation.”

Valentine’s Day is a $2.5 billion industry in Japan

“Anything below 1,000 Yen ($10) means that they’re not that special to you,” Kassab said. “You just have to do it because everybody else does it.” Love chocolates (to a boyfriend or husband) is usually more expensive than obligation chocolates (to boss, co-workers or father) as they are hand-made to craft out a meaningful personal present.

The chocolate giving custom isnt cheap. A recent survey by department store Printemps Ginza found that women on average spend about 3,200 Yen ($35) on chocolate for their significant other, and shell out more than 9,300 Yen ($100) for obligation chocolates. They set aside 2,800 Yen ($30) to buy chocolates for themselves, also known as “jibun choco”.

http://1.bp.blogspot.com/-Y6Nl4Lsz544/TVvB9erLbvI/AAAAAAAAAGg/w4pcTeinBxA/s1600/Valentine+chocolate.jpg
This is how to celebrate Valentine in Japan

The same survey reveals that 61% of women still considered “honmei choco”, or chocolate for loved ones, to be the most important type of chocolate on Valentine’s Day, and 24% for “jibun choco” (chocolate for self) “Chocolates with cute wrapping and lower prices are very popular this year,” Manabu Nudejima, a PR representative at Tokyu Department Store said. He added that “tomo-choco” (chocolate for friends) is gaining popularity among women.

Japan is predominantly a Shinto-Buddhist nation, though some 7080% of the Japanese regularly tell pollsters they do not consider themselves believers in any religion. Unlike in the West, Valentines Day in Japan is not associated with Christian’s Saint Valentine, and the traditional “Happy Valentines Day” wish is ignored.

Japanese men aren’t entirely off the hook. While they may not have to give chocolates on Valentines Day, they are expected to return the favor on the “Japanese White Day” - one month from now. The ‘White Day’ however, isn’t quite as popular as Valentines Day. The country is the largest market for chocolate in Asia. In fact, consultancy firm KPMG records that Japan accounted for about $100 billion of the worlds chocolate consumption in 2012.

Across the world, Valentine’s Day is frowned upon in Saudi Arabia and Iran, where it is banned. The Saudi authorities believed that the festival may lead to ‘moral catastrophe’ especially for the youths. Religious police launched a nationwide crackdown on Thursday against stores selling items that are red or in any other way allude to the banned celebrations of Valentine’s Day, a Saudi official said.

Members of the feared religious police were inspecting shops for red roses, heart-shaped products or gifts wrapped in red, and ordering store-owners to get rid of them, the official said. He spoke on condition of anonymity because he was not authorized to speak to reporters. Red-colored or heart-shaped items are legal at other times of the year, but on Feb. 14 nears they become contraband in Saudi Arabia.

The kingdom bans celebration of Western holidays such as Valentine’s Day, named after a Christian saint said to have been martyred by the Romans in the 3rd Century. Most shops in Riyadh’s upscale neighborhoods have removed all red items from their shelves. A statement by the religious police, informally known as the muttawa, was published in Saudi newspapers, warning shop owners against any violations.

“Those who don’t comply will be punished,” the statement said, without spelling out what measures would befall the offenders. The muttawa however, clarified that they would not shut down or ban any flower shops in the Kingdom on Valentine’s Day, after rumors circulating that they would close all shops selling flowers on the day.

In Iran, the theocrats running the government are not known to be fond of Valentine’s either. Every year on this day, the authorities would dispatch extra personnel on the streets aimed at preventing the spread of ‘corrupted culture’. “This year they told us not to sell any red roses otherwise we can face the closure of our flower shop,” said a 40-year-old female florist in north Tehran. 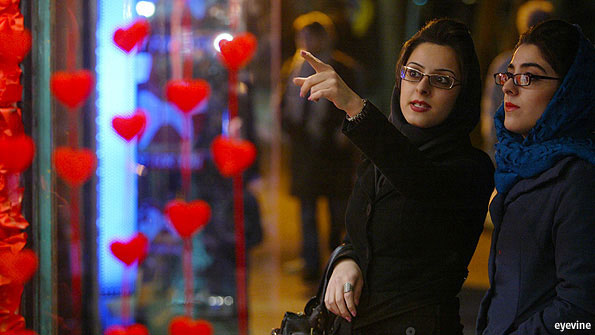 Despite the ban, Valentine’s Day celebration is spreading like wildfire among Iranian youths

27-year-old university student Mehran said he is upset about limitations imposed by Iranian authorities on young people. “Love knows no boundaries,” he said, adding that despite his own financial hardship, he is willing to splash out on this particular day of the year.

Hardliners see Valentine’s Day as part of a deliberate “soft war” waged by the West to corrupt Iran’s youth and is a “sacrilegious cultural inroad from the domineering capitalist system with the aim of weakening the Irans fundamental family values.” But young Iranians with access to the internet are familiar with Western culture, “I just want to live like other young people around the world. I feel like part of the global community when I celebrate Valentine’s Day,” said high school student Reza Khosravi.

Shops are still secretly selling Valentine’s themed products. "We have lookouts to tell us when amaken (commercial inspectors) are coming, says one shop keeper. “If they find un-Islamic products they put a seal on the door and close us down.” A last-minute customer takes some heart-shaped balloons to the counter. “Last year I came home and my wife had cooked dinner and had heart shaped chocolates for me,” he explains. “Shell be upset if I dont buy her something this year.”

Interesting. Guess with the right thinking you can make money with almost anything. In the meantime, the sales assistant in Mirian is very passive in serving customers.