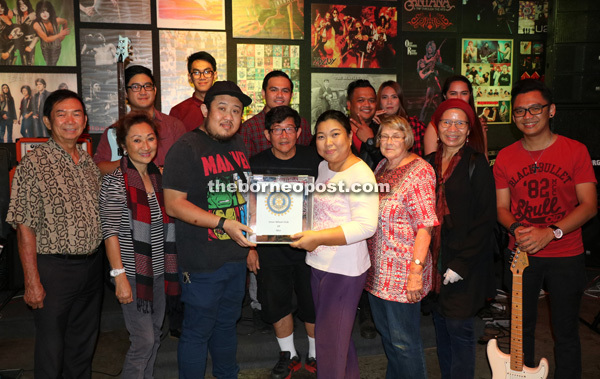 Trinnah (front row, fourth right) handing over the IWC Miri donation box to Jeffri (third left) in the presence of Louis (fourth left) and other members of IWC and the Pinomal Band.

IWC Miri president Trinnah Estiva said they need to raise at least RM1,000 from the generous public in Miri to top up the over RM18,000 raised last year to buy the second of two sets of medical devices for the Accuvein Vein Visualisation System (AccuVein) charity project initiated last year.

Assistant Minister for Land and Air Transportation and Safety Datuk Lee Kim Shin had agreed to provide RM19,000 to purchase the first set of AccuVein.

“The third jamming session will be jointly organised with Bar Thyme Music Café & Bistro at Marina Bay from 4pm to 2am on Sunday, Feb 5.

“We are glad they are willing to host the event and I urge the public in Miri to support the project to buy the badly needed equipment for scanning the veins of kidney patients which are damaged, or to treat fistula failure,” Trinnah told thesundaypost when met at the Music Café & Bistro on Friday night.

“We welcome as many as possible even from neighbouring Brunei to take part in this charity project, as one of our ways to give back to society to help those in need,” said Louis.

The charity jamming will be in line with their focus to provide a platform, especially for budding artistes as well as local and foreign bands to showcase their talents. It is also to support Miri’s effort to make the city vibrant.

Those wanting to support the AccuVein project or needing more information on the jamming session at Bar Thyme can call Trinnah at 016-862 3056 or Louis at 016-8721565.