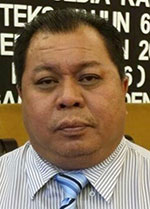 SIBU: Sarawak Bumiputera Teachers Union (KGBS) appeals to the public, especially parents, to be patient when it comes to matters related to dilapidated schools.

Assuring that the state Education Department was doing its level best to tackle the issue, KGBS president Ahmad Malie expressed hope that the people would refrain from making media statements that could put the department, or even Minister of Education, Science and Technological Research Dato Sri Michael Manyin under negative light – as if the relevant authorities did not care about the issue.

“KGBS has no intention to just defend Sarawak Education Department without basis. In fact, it is evidenced that before the end of 2017, the department had tabled clearly and concisely the issue of dilapidated schools and their measures to tackle it during a meeting.

“Hence, KGBS urge all parties to be patient and wait for the turn for schools in our areas to be attended to in time to come,” Ahmad said, stressing that what had been or being planned by the department could not be implemented ‘in a blink of an eye’.

Nevertheless, Ahmad said KGBS did not deny the dilapidated condition of hostels at several schools across the state, especially those in the rural areas, as what had been voiced by certain quarters via print or social media.

“In this issue, KGBS thanks the Sarawak government under the leadership of Chief Minister Datuk Patinggi Abang Johari Tun Openg, who had established the (post of) state Education Minister as a channel to hear and act upon certain issues faster and more effectively,” he added.

Ahmad also expressed his thanks to those who raised the issue, be it via print or social media.

Moreover, he said as a union that wanted to see the physical infrastructure of all schools in good to be in good, working condition, KGBS was aware that the state Education Department had been doing its best in tackling the infrastructure issue, which had been reported by the print media.

Recently, a call had been made upon the department for it to be more alert to the lack of facilities at boarding schools, especially those in the rural areas.

This problem also included lack of basic facilities such as electricity and clean water supply.

“At the school hostels, facilities such as mattresses, closets, cabinets and beds are often overlooked,” Wellie Henry Majang, who is Dayak Think Tank Group (DTTG) president in Miri, said then.

He brought up the matter after receiving complaints from some parents who were unhappy with the poor condition of the school hostels where their children were staying at.