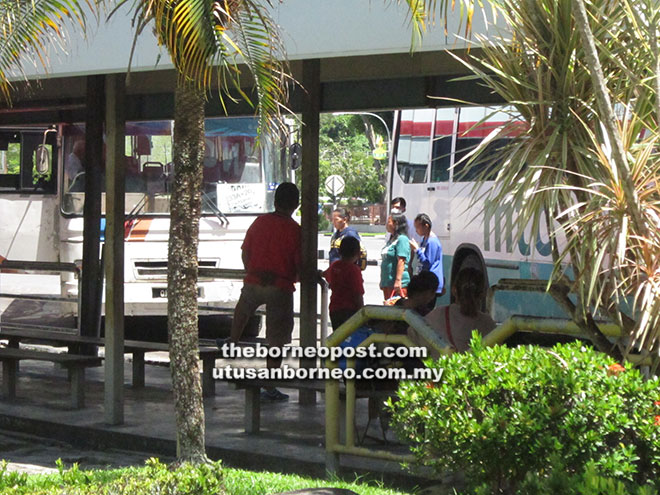 Passengers boarding a bus at Jalan Puchong Bus Station in the city centre.

MIRI: Many people in northern Miri see the bus as the preferred mode of transport to go to the city centre or within Permyjaya Township.

Entiang Jenang said: “In the wake of the current economy situation where prices of goods and services continue to go up,

it is cheaper (less than RM5 per trip) to take the bus from Permyjaya to the city centre including going to commercial centres.”

Waiting at Jalan Puchong Bus Station in the city centre for the bus to bring her back to Permyjaya, the housewife said the fare is cheaper compared to taxis, Uber or Grab including pirate and private cars.

“Fares are less than RM10 for round trip. I have some extra for grocery and other necessities. It will cost more to take a taxi.”

Entiang said passengers feel safe in a bus as the driver is someone they know or are familiar with.

“I feel it’s risky and dangerous to ride on any route in pirate or private vehicles, especially for a woman travelling alone. The driver might harm or rob them – safety is the reason I avoid hiring them,” she said.

Observations reveal that most people taking the bus come from the low-income group, elderly and some youths.

Although there are apps to call and private cars for hire at reasonable fares, Entiang is among those living without smart phones.

She foresees that technology is inevitable with the march of time as many internet-friendly apps become available.

“I believe that one day stage buses will use apps in billing passengers. Internet use could become the norm so we have to pick up the skill from our children or the younger generation.”

On the outcry of some passengers that bus services are unreliable since sometimes they wait for more than an hour for a bus at bus stations or bus stops, she said they cannot solely depend on bus drivers or operators.

To avoid missing a ride or a prolonged wait, Entiang advised passengers to know the bus schedule.

She said: “We introduced machine ticketing system about 15 years ago. It is unacceptable for passengers – even regulars – to expect change when they hand over a big note like RM5 or RM10,”

“Please get ready the right fare. Don’t expect the driver to carry notes and coins for the change. As operators, we will not revert to the old system of hiring a conductor as it incurs extra cost.”

Yeo said those expecting change will only slow down the smooth boarding of the bus by other passengers.