Israel: Chinese and Jews should cooperate in global business

Israeli prime minister Benjamin Netanyahu and Palestinian president Mahmoud Abbas went to China this week to gather political support from the emerging superpower, in a piece of diplomatic choreography that has highlighted the Asian giant’s growing interest in the Middle East. The Chinese government traditionally lean towards Palestine on issues concerning both, though the populace in China are increasingly tilting in favor of Israel. China supported an independent Palestinian state, but it also maintains a friendly relationship with Israel and affirmed its rights to exist as a Jewish state. Beijing however, is reluctant to become too deeply embroiled in the conflict. Rapid economic growth and especially its thirst for oil have made China now the largest petroleum importer from the Middle East, and it would not like to jeopardize such relationship.

On the other hand, China’s economic links with Israel are burgeoning; bilateral trade has grown to around $8 billion annually, and China has become a prime customer for Israeli technology. The brains in Israel are essential as China seeks to play technological catch-up with America and Europe. China is now a major purchaser of Israeli know-how, from high-technology to agriculture, engineering and military-related services.

“The Middle East confuses the Chinese,” said China expert Yoram Evron of Israel’s University of Haifa. “But in the past two years, there are people in China who think it needs to expand its activities in the region in order to safeguard its interests.” Peace talks between the Israeli and Palestinian sides have been deadlocked for four years and the U.S. president, Barack Obama, failed to get both into a peace talk.

The view was echoed by Middle East expert Li Weijian of the Shanghai Institute of Foreign Studies, who said the region was far too important for China to ignore, particularly in light of Beijing’s increased economic and political clout elsewhere in the world. “China needs to play a role in major international affairs, including the affairs of the Middle East, and China has been stepping up efforts in this respect,” he said.

China under Mao Zedong formerly adopted a strongly pro-Palestinian stand in the mid-1950s. After Mao’s death, China recognized the Palestinian statehood in 1988, but established diplomatic relations with Israel later in 1992. Since then, ties between Jerusalem and Beijing have expanded rapidly over the past 15 years.

Abbas has concluded his state visit to China and left on Tuesday, while Netanyahu is still in the country and has visited various places to endear himself with the Chinese public in Shanghai and Beijing.

For China, sympathies towards the Palestinian cause will save its government tons of diplomatic headaches, especially with the 57 OIC states. But the Chinese people’s view on Israel is highly positive. Although the large majority of Chinese have never met a Jew, the prevailing opinion in China praises and glorifies the Jews and the State of Israel.

Jewish achivements and business prowess are highly revered in China. Other pearls of wisdom by the Chinese include: “Israel is small and surrounded by enemies, but manages to survive and succeed,” and “Chinese and Jews are the only people that have maintained their character throughout history.” The Jews are generally viewed as very intelligent people in China.

A common basic assumption in China is that Jews have money and power. The difference is in the approach towards this assumption: while in many parts of the world, the Jewish dominance are viewed with a feeling of disgust, but in China, the Chinese have developed great admiration, even idolization, for them, and hope to emulate the Jews for what they have achieved. 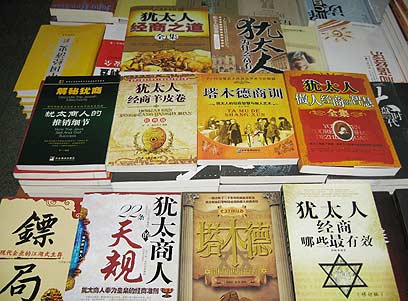 Many popular business guides in China all talk about the Jews

China does not and never feel threatened by the Jews. On the contrary, China views Judaism as an ancient and wise culture like its own, and respects the high moral and family values emphasized in the Talmud. In China, bookstores have an entire section of business books using the Jewish motif to attract readers.

On the opposite side, the Chinese have a lower opinion towards the Arab states. Behind the scenes of conferences and discussions, the Chinese privately conducted an analysis of the Muslim world. In the report “What Keeps the Muslim World Back”, the Chinese said they were perplexed about the Muslim world’s particularly the Arab world’s inability to deal with the modern world.

It added that the Chinese and the Muslims had suffered the same humiliation and occupation by foreigners over the past two hundred years, but the Chinese and Muslim reactions to these experiences seem so completely different. The Qing dynasty collapsed in 1912 while the Ottoman Caliphate broke up in 1923.

http://4.bp.blogspot.com/-krX6LxDWQIY/USNn4OtoeYI/AAAAAAAAAtY/PGTC1Eoz6bo/s1600/burqa-00.jpg
Most Chinese viewed the Arab world as ‘backward’ and ‘stucked in past’

“We also suffered, but now we control our destiny, and are doing everything we can to learn from these foreigners so that we can benefit from the modern world and ensure that we do not suffer this humiliation again. We Chinese ‘look to the future.’ The Muslims, on the other hand, seem to have a different approach: instead of looking to the future, they “are mired in the past,” more concerned about taking revenge against those foreigners whom they believe had humiliated and oppressed them,” the Chinese report said.

“It was because of this focus on the past that Arabs and Muslims were therefore unable to build societies which could participate in the modern world. Revenge and victimhood could permanently cause the Arabs and Muslim world to remain behind the West and Asia.”

And it is this exact opinion of the Chinese - that the Jews are progressive and Arabs are backwards - that Netanyahu could capitalize on. Had it been Abbas, the Chinese public would not have paid much interest. Chinese business people and economic leaders gathered to hear Netanyahu’s speech. “I think this is a breakthrough, and it’s very, very significant for Israel and I believe it will also be significant for China. China faces the needs of rapid urbanization, explosive growth of cities, and growth from middle income to higher incomes. There is only one way to ensure a successful transition in both areas: technology. We can both join forces.”

“The need for innovation never stops. It always continues, at every stage of the business, of the development. This is the way to assure that the Israeli partners continue to infuse technology into Chinese needs, Chinese businesses, Chinese projects, in China and outside of China. So I have a simple suggestion. Lets go. Or you say in Chinese. ‘Jia yu’ to Chinese and Israeli cooperation,” Netanyahu said.

In Shanghai, Netanyahu praised Chinese exceptionalism in opening their gates to the Jews when nearly all other countries in the world slammed their doors shut. Some 18,000 Jews found refuge into Shanghai during World War II, and both the Chinese and Japanese left them alone. 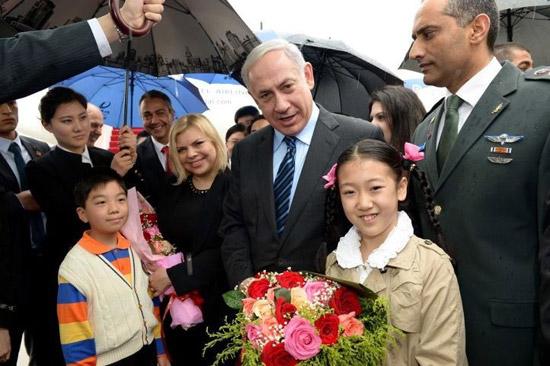 Netanyahu won the battle against Abbas on public image in China

"Seventy years ago we could only plead, only beg to be saved. Today we have a state of our own, a strong army of our own. And now we no longer need to beg to be saved, we are finally capable defend ourselves, Netanyahu told the Chinese masses in Shanghai. “We will remember our past: our ancient past and our recent past, and our gratitude that you showed us such kindness.”

The Israeli prime minister also highlighted about the histories Jews in China. Among the 12 tribes of ancient Israelites, one of them reached China during the Tang dynasty. They settled in Kaifeng, then the capital of the Northern Song Dynasty and adopted the Chinese surnames Ai, Shi, Gao, Jin, Li, Zhang, and Zhao.

The Jews of Kaifeng preserved Jewish traditions and customs for many centuries until the 17th century, when assimilation began to erode these traditions. The centuries of intermarriage between Jews and other ethnic groups, such as the Han Chinese, have now made them indistinguishable in appearance with that of Chinese. Some descendants of Kaifeng’s Jewish community say their parents and grandparents told them that they were Jewish and would one day “return to their land” (Israel).

One nation, many faces. We help them all return.

An article titled “The Wilders Syndrome: Jews, Israel, and the European Right” accused Li Ka Shing, the wealthiest person of Chinese descent, of being a descendant of Kaifeng Jews. It further elaborated that the Li/Lee Chinese have a disproportionate record of successes, for instance, the 2 richest Chinese (Li Ka Shing, Lee Shau Kee) carry this surname, together with other successful individuals such as Robin Li, founder of Baidu search engine and Lee Kuan Yew, founder of modern Singapore.

Any intermarriage in preceding generations are no longer considered Jewish in the eyes of Jewish law. “They may stem from Jewish ancestry, but they aren’t Jewish,” says Rabbi Shimon Freundlich, who runs the orthodox Chabad House in Beijing.

Opponents argued that Li/Lee is the second most common Chinese surname and therefore natural that the statistics will be higher. After all, the Jews are not the only one fused into the Li’s. In 644 AD, once a powerful empire, Persia fell to the invading Arab armies. Refusing to submit to Islam, the last king of Persia, Yazdgerd III, fled to China with his entourage. The Persians all adopted the surname Li and assimilated into the Chinese society. Today, the Persian diaspora, who fled Iran after the 1979 Islamic Revolution, are some of the most successful people in the world. One of them is Pierre Omidyar, the founder of online auction website eBay. They had invested between $200 and $400 billion in the United States, Europe, and China, but almost nothing in Iran - as their expression of hatred towards the theocratic regime in Tehran.

After centuries of dormancy, China’s ancient Jewish community is re-emerging. In 2009, the first group of Chinese Jews returned to Israel.

What is the relationship between Jews, Israel, Palestine, Arabian. Im so confused with these terms.

What is the relationship between Jews, Israel, Palestine, Arabian. I’m so confused with these terms.

relationship between them: 2 brothers who fight and now dragging the world with them

i think Chinese should just cooperate with the jews. who cares about the Arabians, apart from oil…the people are pretty…well…you get the point…

Buy their oil, do business with other people…this is a profit motivated world.