This is excellent information. I have done some exploration myself but I had nothing like the same success as you. I think the Sarawak Heritage Society was thinking of setting up a museum in Miri, I will follow with them and keep you in the loop.

I do have some interesting information on what I found while exploring in the Kampung Pangkalan area, that I will share with you later.

In the meantime I want to share some recent history of the Lutong Airstrip:-

I just did a Google search and found this image of a Puma Helicopter landing close to the Shell Terminal at Lutong Airstrip. 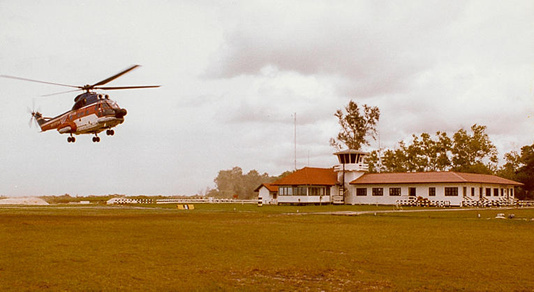 This Photo also brings back fond memories of Miri in the 1980’s. Before I came to Miri I had done a one year contract with ARAMCO in the middle of the hot harsh Saudi Arabian dessert where the summertime temperature is 50+ deg. C . When I arrived in Miri I thought I was in paradise. Anybody who complains about Miri should spend a year in the Saudi Arabia dessert, then they will appreciate how lucky they are to be living in Miri.

In the 1980’s I spent a few years working offshore on the E11 & F23 Projects on two weeks on two weeks off rotation. There is a possibility I could have been in the Helicopter in the photo!!! The E11 Project was running behind schedule. There were some heavy penalty clauses in the Shell contract if they missed the first ever scheduled LNG tanker loading. To get back on schedule Shell arranged for Bristow Helicopters to shuttle project crews on 12 hour shift changes to and from E-11 . This went on for months continuously on a 24 hour basis and this helped get the project back on schedule.

As I have mentioned before in the 1980’s Shell installed the 2 meter high concrete piles on the coast line (at that time) at Lutong Beach to protect these facilities from the sea . Since Shell lost ownership of the Lutong Airstrip facilities nobody has taken responsibility to installing barriers to prevent coastline erosion . The beach has already almost reached Jalan Pantai and its just a matter of time before it does. If you look at the coastline just half a kilometer north of Lutong Beach there are huge heavy duty stone erosion barriers in place. I think Shell or maybe Petronas have ownership of this coastline???
While Shell/Petronas may not be legally directly responsible for protecting the coast line its obviously in their interest to protect any of their facilities close to the coastline from damage due to coastline erosion. Lutong Airstrip in all its glory, 1989. Photo by Dougal

A legacy of World War II Japanese occupation, and bombed by allied forces multiple times during the Japanese occupation (see: History: Decline & War), this airstrip was then reconditioned and put into service by 1954, to actually became a destination of commercial passenger-carrying planes when Malayan Airways expanded its Borneo service air network, and remained so until Miri Airport runway was built.

It was used by Royal Dutch Shell for air operations, which was by then operating several aircraft and seaplanes of their own that replaced ships used to supply neighboring Seria with newspapers, mail, and cold storage food supply and other amenities - in addition to becoming used as air ambulances and photo reconnaissance flights, all of which fly out of Lutong Airfield. This article is from the web site miriresortcity dot com - this sentence is here to prevent blatant plagarism. These kinds of flights continued to much later when they operated Super Puma helicopters to offshore installations and Twin Otters to other land-based regions by the 1980s. The airstrip had an ICAO code “WMLU”. The airstrip had basic hangars, a terminal and a control tower, with a strip paved runway. What made this airstrip unique was that it was located on a piece of peninsula land in between the sea and Miri River, with a road right by the sea at the end of the runway. So when a plane or helicopter came in to land, crossing lights and a barrier was activated by the airport controllers to stop cars along the seaside road (adjacent to Lutong Beach) to prevent cars from interfering planes landing as they come in low over the beach and road. The airfield also originally had a grass landing strip, which was later refurbished with a paved runway by the late 70s.

This placed Miri as one of the more unique places in Sarawak as a town with two operational airports within only a few miles of each other.

The Lutong airfield was decommissioned in the early 2000’s, and all of its buildings had been demolished, while the remaining runway used mainly as a venue for vehicle drag racing and paramotor. The airfield land has been marked for development (as of 2015). All offshore helicopter and oil platform flight operations have now been moved to and are currently handled at Miri Airport today.

At the Lutong Airstrip Area, I have put landmark pins on all the WW2 map legend items on my Google Earth view with the WW2 map overlay and saved the image. I have then removed the WW2 overlay then saved a new image showing the landmark pins on the current Google Earth View only. The second image will help you clearly identify where the WW2 sites of interest are today. Depending on ease of access you may want to explore these sites to see if you can find any WW2 relics. A metal detector may help. If you want to do this, please wait until the MCO is over. Also probably not a good idea to do if your fasting. Hope you find these images of interest. You can clearly see how much the coastline and the routes of the rivers have changed over the years.

Thank you for the info buddy… Oh no worries, since its still Movement Restriction Order and also fasting month, there is no outdoor activities for now till everything back to normal. And besides that, Im working in KL and once or twice a year going back to Miri for a holiday. Thank you so much Jay for the really really really pack info on the airstrip. will do some field trip with our metal detector on the location, perhaps in June with my fellow team

Bout the photo, yeah Im aware of the beach erosion and there is one thing catches my eye… the underground shelter…how I wish it was still there…but I believe the site already gone due to the new housing development project activities…

But it doesnt stop our efforts on tracing down any remains of the WW2 remnants in Miri, and thanks again for the sharing my buddy.

Hear from you soon!!

I have some new information regarding the Wooden Piles at Lutong Beach. Recently revisited the Australian War Memorial website and did a search for Lutong. I found the two attached new photographs

The first photograph shows what is described as a temporary kitchen at a camouflaged aircraft hangar. There are no hangars shown on the WW2 map I have. I believe this is the camouflaged entry to the Bunker indicated on the WW2 map. To the right of the entry it looks like a solid earth mound not camouflage. 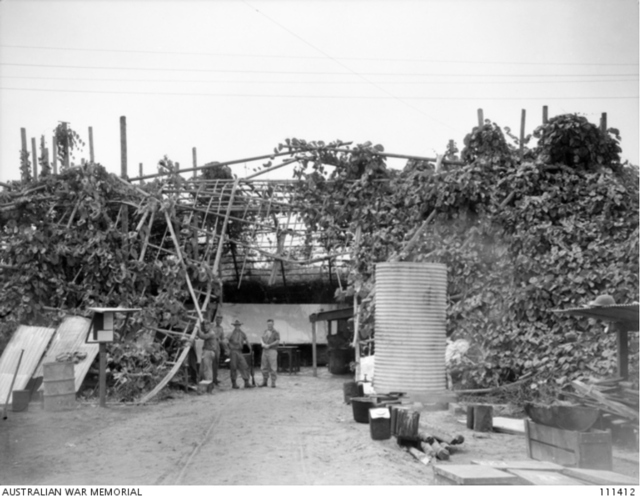 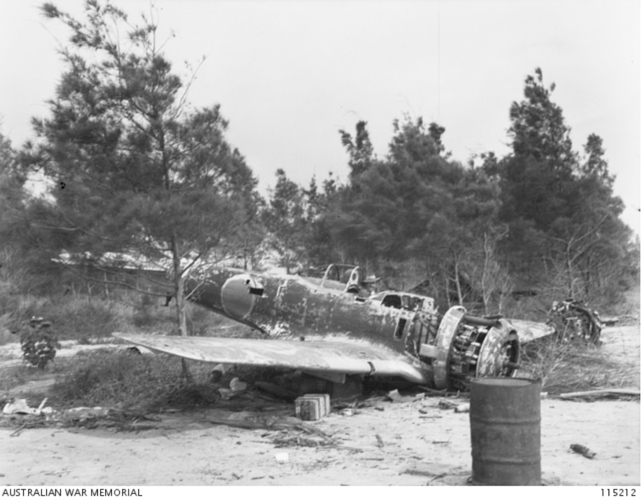 When I did a Google search on the wingspan of this type of aircraft 1 got the following results
Wingspan : 35.58ft. Length: 29ft. Height: 11ft

I went to Lutong Beach with a 8 meter measuring tape and measured the distance the inside of the wooden piles . in the Northern run of wooden piles for the first 100 meters + I measure this distance at 11.8 metres . At the Southern run it is less than 10 meters.

Based on the measurements I believe that the Japanese Zero aircraft could have been snuggly parked in the WW2 bunker in the Northern run of the bunker effectively acting as a Aircraft Hangar for the smaller attack aircraft. They may have used the bunker as an aircraft repair workshop as shown in one of the photos I had previously posted on this site. .

I believe that that Southern run may have been used to store ammunition including bombs for the bomber aircrafts (they show bomber aircraft revetments on the WW2 maps). This may have made the Australian forces decide to destroy the bunker by internal explosion . If they had tried to remove explosives there was a high risk of fatal explosion while handing the explosive ammunition. it would be difficult to destroy the bunkers with external explosion/bombing as bunkers have been designed to withstand bombing . An iternal explosion would have destroyed everything above the ground but the wooden piles that were driven into the ground would have survived . With the coastal erosion we can now see tops of the remains of the below ground section of the wooden piles.

I took this photo of a wooden pile recently exposed on Lutong Beach due to coastal erosion. The top of the pile is black and looks like charcoal. This is probably the result fire caused by an explosion when the bunker was destroy. 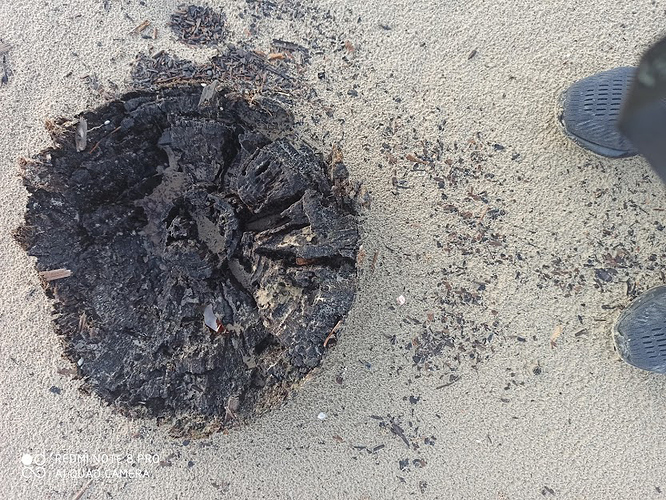 Hi, John Hill, thank you for sharing all those photos. I’m working on personal research on Miri City area focusing on the river village the old ones during the WWII. Kampung Wireless near Miri river mouth. Do you have any pictures showing the aerial view any photos or maps like what you have shared. I do really appreciate it. Thank You very much

recently me and one of my research mate went to Canada Hill to track down lost WW2 Japs defense site located on the top of the hill… and there is an account from former residents name Joe and Atte whom were close follower of my research page Paracrypt Research and Study Group on FB… theyve told me that during their childhood time somewhere in 90s, theyve seen a piles of junk car or old car which is not modern 90s model but something more like 50s or earlier than that together with what thyve saw as a cannon turret which was left inside the thick bushes near the slopes downhill near their house… use to be their playing ground but according to old folks and local, the area was quite haunted and there is also japs grave nearby.

Ive tried to tracked it based on the area shown by both of them, unfortunately still unable to find it, perhaps the junks already scavenged by iron collector…

Later in the plan, me and the team also planned to go to lambir to track down japanese defense area somewhere located at the Lambir Hill… according to some sources its not fortified but somekind of hollow bunker and fox holes site…

will share to you if there is new findins Jay…Cheers

Do you have any info on what type of WW2 Japs aircraft used by the Japs in Lutong? coz as far as my limited info, I believed zero and zeke are used in Miri for the Borneo Campaign… any idea Jay?

Hi John. There’s been some intriguing finds at the Lutong Beach recently. Here’s some photos of the objects. All metal. Roughly aligned to be at the beach end of the old runway. No idea if th objects are at all related to your study. 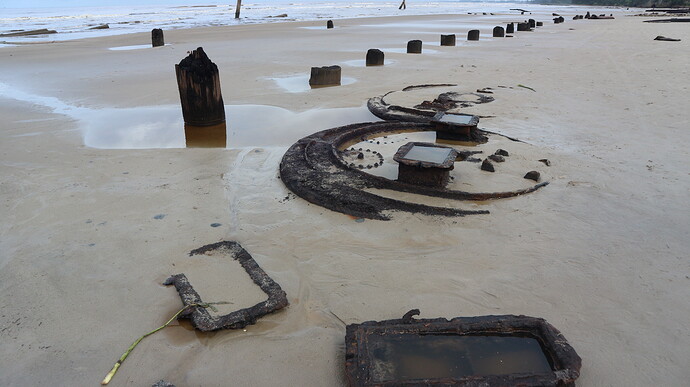 Thanks for your interest in this intriguing issue. FYI there is an investigation underway. There are a few possibilities but at this stage we don’t really now what these objects are . I would rather wait for the conclusions of the investigation than indulge in unsupported speculation.

These logs pilling was done in 1976 from presence airport beach to the boat club, to prevent the last Lutong airstrip from eosion. The black occurrence of the log is a process of pertrifiex due to burial underground.