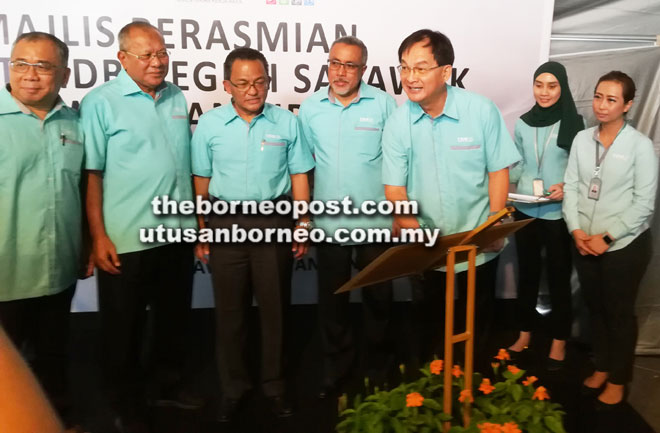 Baru (third right) appends his signature to declare open the CIDB Sibu office while others look on.

SIBU: Works Minister Baru Bian said the various infrastructure projects implemented in Sibu has led to the rapid economic development in the division, particularly in the construction industry.

He said besides the construction of the RM1.7 billion Sarawak Pan Borneo Highway (Phase I packages), there were at least three other private projects being implemented in the division thus far.

“The projects not only benefit the local contractors but are also catalysts for more economic development in Sibu,” he said at the opening of Construction Industry Development Board (CIDB), Sibu branch, here yesterday morning.

The opening of Sibu CIDB office yesterday brought to four the number of such offices in Sarawak, after Kuching, Miri and Bintulu.

Baru said as of February this year, 96,038 contractors nationwide had registered with CIDB. Sarawak had 8,650 contractors, 974 of whom are from Sibu.

He said the construction industry had also engaged more than 850,000 registered personnel and workers nationwide, out of whom, 45,000 were from Sarawak with Sibu alone accounting for 13,000.

‘Hopefully, all construction industry players will make full use of the CIDB and participate in its programmes aimed at enhancing their skills, competency and expertise.”

Baru said it could not be denied that the construction industry was one of the backbones of the country’s development.

“The construction of a sustainable infrastructure can only be achieved with the ability of the local construction industry players to produce a skilled, competitive and a dynamic labour force.”

Baru said Sibu, the third largest town in Sarawak after Kuching and Miri, was not only strategically located in the central region, but is also the gateway to Sarawak Corridor of Renewable Energy (SCORE).