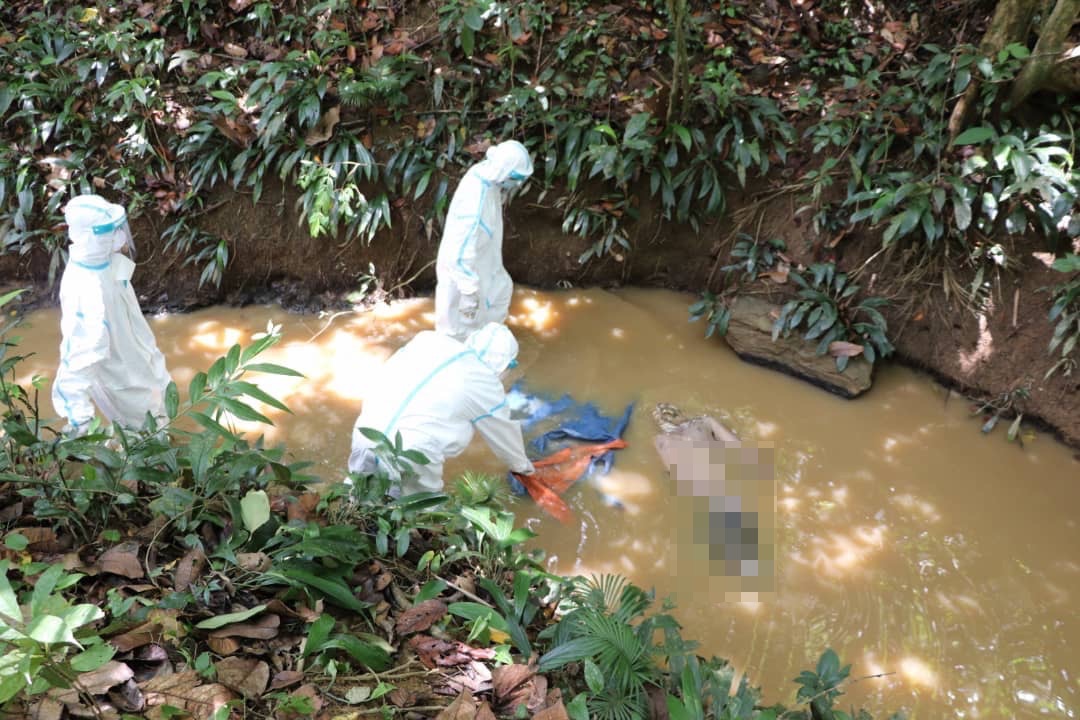 Investigators prepare to retrieve Imran’s body from the drain.

MIRI (April 29): An Indonesian estate worker who was known to frequently harass and proposition his fellow compatriot’s wife was found murdered in Lawas yesterday.

A passerby found the shirtless body floating in an oil palm plantation drain, near Kampung Siang Siang Laut around 9.30am and contacted the police.

Lawas police chief DSP Roslan Leman said the victim, identified only as Imran in his early 40s, was found clad in black jeans and wrapped in a blue and orange canvas.

He said an examination of Imran’s body found there were several injuries and cuts to his head, the back of his body, and left knee.

“As a result of further investigation, we managed to detain the 32-year-old suspect from Indonesia at 12.10pm at a quarters in Trusan Estate, in the Sundar area on Wednesday.

“As a result of the preliminary interrogation, the suspect admitted that he had a fight with the victim on Monday because the victim was always harassing his wife, including asking his wife to have sex,” Roslan said in a statement today.

According to Roslan, the suspect admitted committing the offence alone, armed with a harvesting spike, which he used to stab Imran to death and then wrapping the body with a canvas.

“The suspect also admitted to carrying the victim’s body alone to be dumped at the location where the body was found and the exact location of the fight is being investigated,” he said.

Roslan said the suspect came to Lawas six months ago via the Sindumin jalan tikus or illegal route from Sabah, with his wife and two children aged two and six.

The suspect has been remanded for seven days to assist with the investigation under Section 302 of the Penal Code for murder.