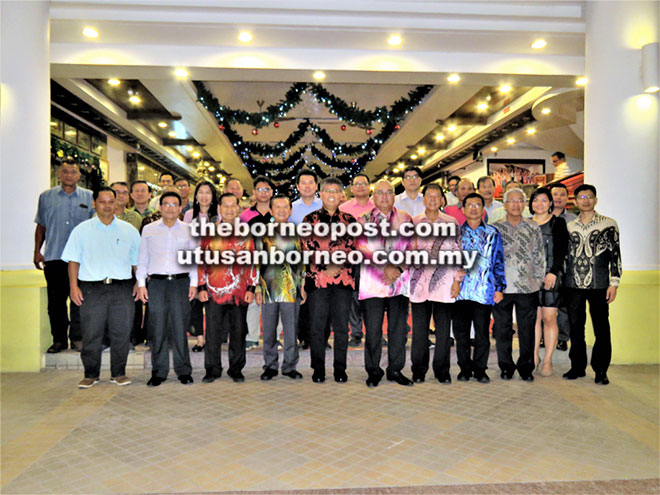 (Front, from fifth left) Jahar, Yii, Ting, Khoi Yun and others pose for a group photo after the dinner.

MIRI: Strong ties and continuous cooperation between Sarawak and Indonesia will remain for many years to come.

Indonesian Consul-General in Kuching Jahar Gultom said his experience working in Sarawak over the past three years had been excellent.

“During my tenure in Sarawak, I have received excellent cooperation from all parties, including the government, business sector and the community.

“I am sure the Indonesian people here feel the same as they are happy to work here. Small problems do happen but that is normal. I hope this cooperation would remain strong for a long time,” Jahar said at his farewell dinner, hosted by Miri Chinese Chamber of Commerce and Industry (MCCCI) here on Monday, where Assistant Minister of Tourism, Arts and Culture Datuk Lee Kim Shin, Piasau assemblyman Datuk Sebastian Ting, Mayor Adam Yii and MCCCI chairperson Lee Khoi Yun were also present.

Ting said: “He (Jahar) has been to Miri numerous times; he will go to the ground to see what is going on. He is indeed a humble and a very approachable man.”

On the education for children of Indonesian plantation workers born in Malaysia, Jahar said back in 2004 and also in 2015 during Indonesian President Joko Widodo’s visit to meet Prime Minister Datuk Seri Najib Tun Razak, both governments agreed that the children had the rights to education.

“So far in Sarawak, we have 19 Community Learning Centres (CLCs) and we are still working with the plantation companies on this matter, and we hope by 2018, we could set up around 50 CLCs.

“There are 227 CLCs in Sabah. There is even an Indonesian school in Kota Kinabalu that is supervising all these CLCs, including those in Sarawak,” he said, adding that the educators are hired by the Indonesian government on a two-year contract while the syllabus carries Indonesian and some Malaysian subjects.