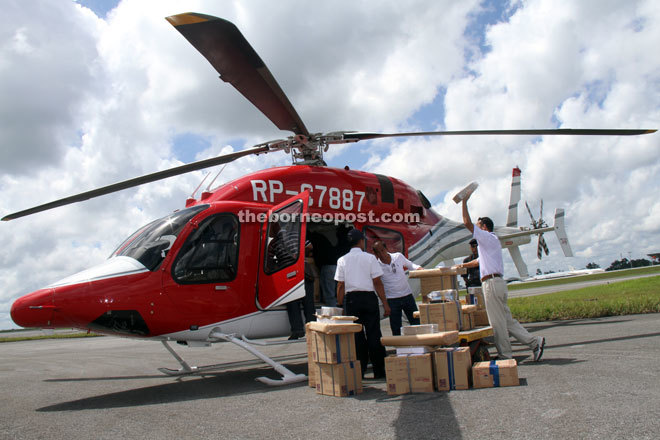 EC staff loading the last batch of ballot papers onto a helicopter at Hornbill Skyways yesterday. — Photo by Chimon Upon

KUCHING: The Election Commission (EC) will be using the indelible ink on May 7 and during early voting today, so there is no truth to rumours stating otherwise.

Its state director, Datu Takun Sunggah, said EC had not received any substantial complaints regarding the use of the indelible ink, which was introduced during the General Election in 2013 to prevent electoral frauds.

“EC has even used the ink during by-elections without much controversies or issues. So, there is no reason to discontinue using the ink,” said Takun at Hornbill Skyways yesterday after overseeing the sending-off of election ballot papers to all 41 districts.

“Only tomorrow (early voters start casting their votes at 8am) we will know (for sure) if there are any controversies or issues arising from the use of the indelible ink (this time around).”

He hoped the 24,604 eligible early voters comprising police, General Operations Force and military personnel would be able to cast their ballots without any problems today. The figure does not include Bukit Kota and Bukit Sari seats as they were won uncontested by BN candidates on nomination day (April 25).

Seventy-nine voting centres involving 100 polling streams will be opened at 8am today. Their closing times, however, varies between 2pm and 5pm.

The ballot papers for the early voters will not be counted at the respective polling centres but instead be collected and kept in police lockups. Counting of these ballots will start at 4pm on polling day (May 7).

On another matter, Takun said EC would not be transporting anymore ballot papers to the 41 districts, which was divided into Kuching, Sibu, Sri Aman, and Miri zones.

that all ballot papers were printed at Percetakan Nasional Malaysia Berhad from April 25 to 30.

EC delivered the ballot papers by land for constituencies between Opar and Bukit Saban.

Meanwhile, Takun said EC expected to announce the earliest results by 6.30pm as some centres would be closed before noon on May 7.

“The latest results will, however, be announced maybe around 11pm.”