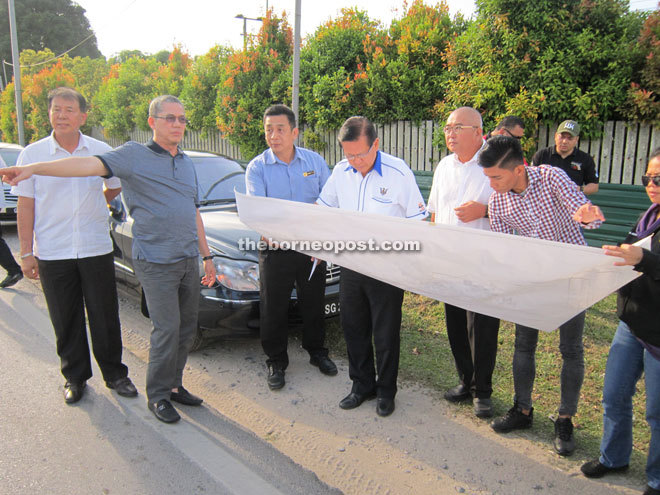 Fadillah (second left) with Ting (left), Lee (fourth left) and other officials during the inspection at Taman Tunku.

MIRI: The upgrading of the Miri-Pujut Bypass into a dual carriageway will ease up the congestion along the stretch.

“Miri-Pujut Bypass’ status is a state road of single carriageway. To ease up and solve road congestion in the area is to include it into Pan Borneo Highway and hopefully, the tender would be out within this year. The project will be carried out in phases,” Fadillah said prior to going for a site inspection on Sunday.

On the proposed upgrading of Pujut-GK roundabout, the minister said his side had submitted a proposal to the central committee.

“The provision was made through JKR (Public Works Department) Sarawak with an estimated cost of RM15 million. We are going to appeal every year as this is one of the critical issues and will ease up traffic congestion at the roundabout.”

The other road to be upgraded would be Hilltop-Jalan Cahaya leading to Miri Hospital, where the congestion along there had been rated as ‘acute’ due to the frequency of accidents there.