I owe a lot to Adenan, says Watson Nyambek 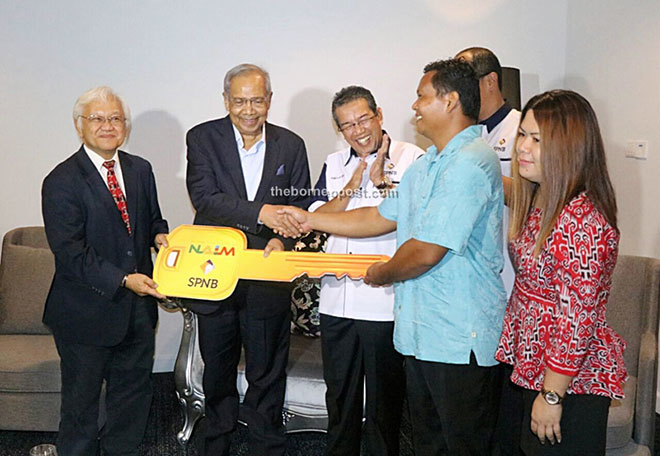 KUCHING: Former national sprinter Watson Nyambek will always remember the late Datuk Patinggi Tan Sri Adenan Satem as a true leader for all Sarawakians, regardless of race and religion.

The 40-year-old – whose time of 10.30 secs clocked in 1998 stayed as the national 100m record for 17 years before it was broken at the Malaysia Games last year – described Adenan as being ‘race blind’, in that the state leader came immediately to his (Watson’s) aid in his time of utmost need.

Watson was referring to his bankruptcy case last year, where Adenan helped him to get a proper house in Miri and other assistance after hearing about his plight.

“He (Adenan) helped get me out of bankruptcy and he also asked the state to secure for me a better house.

“I also would like to thank SDNU (Sarawak Dayak National Union) for helping me settle some of other matters,” said Watson when contacted yesterday.

Asked what Adenan’s advice was to him then, Watson said the former chief minister told him to be extra careful in his personal financing and also to strive harder in his coaching job for the state.

Watson said he and wife Fellizia paid their last respects to Adenan at Masjid Jamek here last Thursday together with thousands others.

There, Watson said, Jamilah had told him never to give up his love and spirit for the sport, even though Adenan was no longer around to inspire him.

The former sprinter said the 100m discipline had always been under the purview of the chief minister since the era of Tun Pehin Sri Abdul Taib Mahmud – now the Head of State.

Meanwhile, Watson took the opportunity to express his wish for the state government to help him secure a permanent job under Sarawak Sports Corporation (SSC).

The matter was first highlighted last year by the then-Social Development Minister Tan Sri William Mawan, who is SDNU president.

Currently, Watson is coaching potential sprinters at the coaching clinics run under Sarawak State Sports Council (MSNS). This engagement, however, is only on contractual basis.

“If given the opportunity to serve full-time under SSC, I can assure the council that I would do all I can to contribute to the overall development of sports in Sarawak, beyond the 100m discipline,” he said.