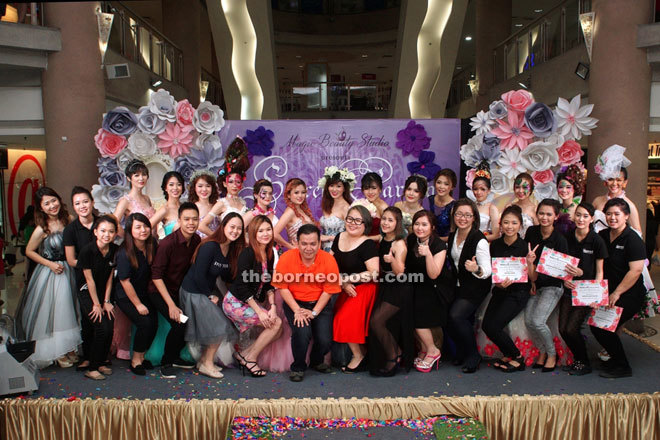 MIRI: The Secret Garden Bridal show was indeed a success as hundreds of pairs of eyes were glued to the models donning beautifully designed bridal gowns while elegantly strutting their stuff on the runway.

Organised by Bintang Megamall and supported by Magic Beauty Studio Make-up and Design Academy, the bridal show, which was held at the popular shopping mall last weekend, attracted hundreds of shoppers.

“Compared to the previous shows here, the bridal show showcased not only beautifully designed bridal gowns; it was a fruitful result of our tutors and students who worked on the whole design and embroidery. Not forgetting the make-up was done wholly by our academy’s students who deserve the praise,” Janet Wong, director and chief of make-up of Magic Beauty Studio told The Borneo Post.

Wong said the colours which varied from pure white to fairy tale blue and pink, to bold colours of bright blue and purple were a favourite among the locals.

“Not so much of the colours itself, we like to introduce to the people here that embroidery plays an important role in the whole look and make-up as well as the hairdo for an overall bridal look,” Wong added.

Meanwhile, Bintang’s senior event executive Allen Wong, who was one of the co-organising chairmen, said the show was an eye-opener for the locals, judging from their applause.

“We want to bring more modern yet artsy design to locals here, giving them a great idea, especially to young soon-to-wed couples. From the responses, we are confident that it was certainly a good sign of the public’s acceptance,” he said.