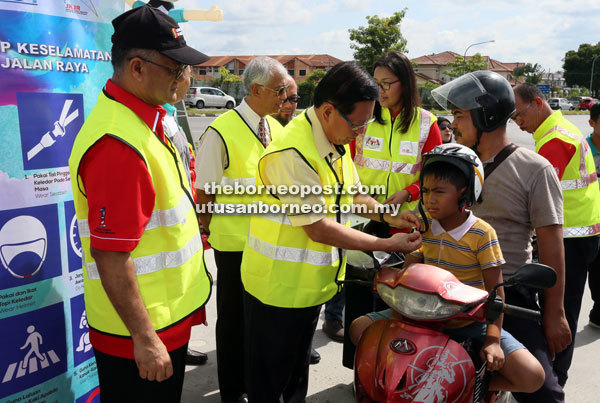 Lee straps a helmet onto a child at the campaign while others look on.

According to Assistant Minister of Land and Air Transportation and Safety Datuk Lee Kim Shin, the HPT initiative would focus on Matang Road in Kuching, Miri Airport Road in Miri, and Jalan Bakun and Jalan Kidurong in Bintulu.

“These four roads are given special focus as the traffic is volume, have high accident rate and high maintenance cost (for Bakun road),” Lee told reporters at the launch of the event at Petronas petrol station near Metro City here yesterday.

The safety programme, according to Lee, was held in conjunction with the Christmas celebration, to inculcate positive driving attitude and the need to be considerate to other road users.

“To reduce road accidents, we welcome corporate assistance through their social responsibility deeds to participate in the campaign.

“We want more of similar efforts to provide greater awareness on road safety to ensure a safe and happy festive celebrations for everyone,” said Lee, who is also chairman of the state Road Safety Council.

He reminded road users to always remember the seven road safety tips: usage of safety belts, usage of helmets when riding a motorcycle, to observe the speed limit, to use pedestrian crossing, using child seat and not to use mobile phones when driving.

On a related matter, Lee said the number of fatal accidents in the state had dropped 1.7 per cent in the first 11 months of this year from the same period last year.

“A total of 158 serious injuries were also recorded in the same period this year compared to 172 cases in the corresponding period last year.”

At the event, Lee also presented 15 adult helmets and five child helmets to motorcyclists passing by the petrol station.