How to catch a mouse?

I have one single mouse who got into my apartment and I am not sure how. I know he is alone because he does the same thing every night by himself. I don’t want to kill it but I need him to leave. Any humane ways to catch and release a mouse?

Eek a mouse! I am so scared of those! I don’t know wh but they make my skin crawl! We had them in our house growing up and I woke up a few times with one in my bed. Ewww! Just shew it out the door with a broom! 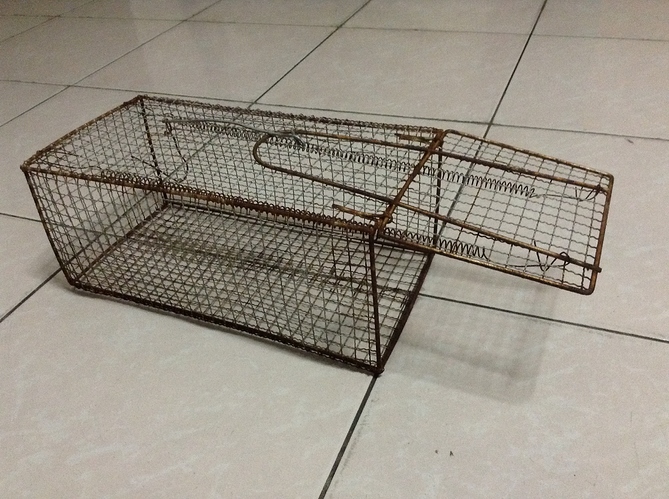 This is the traditional mouse trap which has been in existence since I was born.

The mouse will be trapped without any injuries so you may release him later on. Available in hardware stores.
Happy trapping.

Did a quick search about sticky mouse traps, and it turns out to be very inhumane. Found the following at PETA.org: http://www.peta.org/about-peta/faq/is-there-a-humane-way-to-get-rid-of-mice-and-rats/

Is there a humane way to get rid of mice and rats?

There’s a humane way to do anything! According to Dr. David E. Davis of Johns Hopkins University, “Poisons or traps merely make space for more rats to grow.” To prevent a rat or mouse problem, take away what makes your home attractive to them: food and shelter. Start by making sure that there is no food in open places or in cardboard containers, which rats can eat right through. Keep garbage in tightly covered containers. Next, deny them a way to enter your home by sealing holes at the bottom of walls. Of course, this means that while no rats can come in, any who are already inside can’t get out. If rats are already inside, you will need to set a trap—but be careful which one you pick. Glue traps, flat boxes with adhesive to trap rodents, should be avoided at all costs. Some animals caught in these sticky contraptions break or even bite off their own legs to get free, and the glue badly irritates and scars their eyes. Animals whose faces become stuck in the glue slowly suffocate, and all trapped animals are subject to starvation and dehydration. Nonlethal traps are widely available, inexpensive, and easy to use. Sold by most humane societies and hardware stores, the box-like plastic or metal trap has a spring-release door that closes behind the animal once he or she enters the trap. Check the trap daily, and if you find an animal, simply release him or her outside.

Sometimes I will hear them chasing each other on top of the ceilings late at night! Well, I prefer to think it is them.

I like the humane way myself. There are lots of options, do some googling

As much as I agree with humane treatment to animals I can’t help thinking that mice are kind of undeserving.
Sorry.

That’s a rat trap. A mouse could easily get through the holes of the wired netting trap.