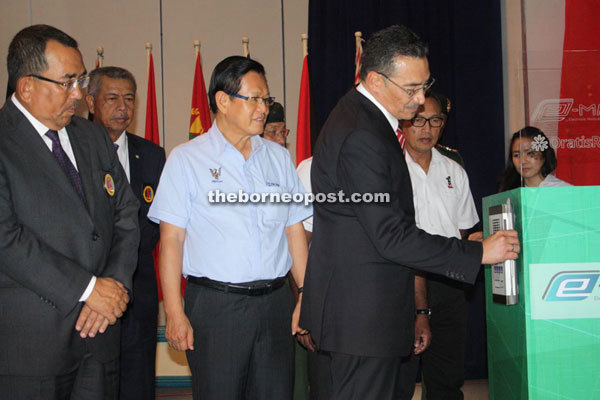 Hishammuddin launches the E-Mass initiative, witnessed by Lee (left) and others.

MIRI: The welfare of personnel and veterans of the Malaysia Armed Forces will be widened to include close family members including widows and children of veterans.

Defence Minister Datuk Seri Hishammuddin Tun Hussein said more initiatives would be announced and the success of their implementation would depend very much on support from members of the force.

“This is an on-going initiative and it is not something easy as the global and nation’s economy is unpredictable. But once we are sure this is one of our five main pillars, we will find ways to fulfil the promise,” he told the media after launching the National Veteran Entrepreneurship Carnival at the civic centre here yesterday.

Assistances such as natural disaster assistance, cost of living assistance and assistance for children of personnel entering public universities have been widened, improved and diversified.

The welfare of ATM personnel and veterans is one of the five pillars in ‘Mindef Direction 2016’ programme. The programme involves collaboration from the armed forces in setting the ministry’s directions and strategic plans, which is also taken into consideration in the 11th Malaysia Plan (11MP).

“I hope these efforts will be translated into undivided support that rejects politics of disunity, politics of hatred and to support our effort, that is not only on paper but has been proven as our agenda since independence,” he said.

Earlier, Hishammuddin conferred ‘Pingat Jasa Malaysia’ (PJM) to 60 army veterans, for their support and sacrifices in safeguarding the nation’s sovereignty while in service.

He also launched the Electronic Medical Automation Supply System (E-Mass) initiative, which is a mediator to facilitate the supply of medications or medical devices (or both), which are not provided by government hospitals or clinics, to eligible veterans.

The E-Mass initiative is free-of-charge and pensioners need not claim any medical payment refund from JHEV.

Currently, there are 700 pharmacies registered with E-Mass and 54 are found in Sarawak.

The MoU is to create job placement offers and on-job training for future pensioners.