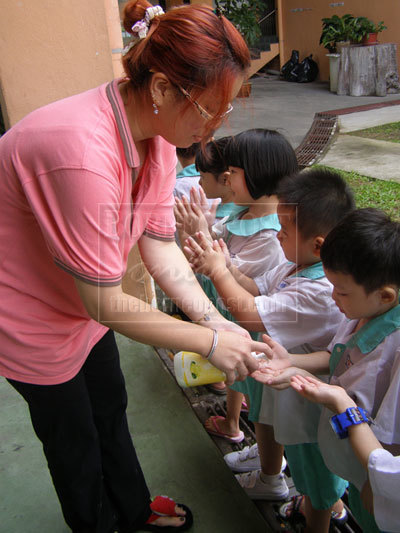 PREVENTIVE MEASURE: A teacher gets preschoolers to wash their hands as a precaution to keep HFMD at bay. (File photo)

SIBU: The hand, mouth and foot disease (HFMD) situation in Sarawak is still above the alert level, with signs of an upward trend to the epidemic level.

According to state Health Department director Dr Jamilah Hashim, the alert level for HFMD in Sarawak is 246 cases and the situation is at epidemic level when cases reach 365.

“This number of cases has exceeded the warning level and is approaching the epidemic level,” Dr Jamilah said in a press statement yesterday. She further said until Aug 27 this year, a total of 4,060 HFMD cases were reported in the state.

Compared to the same period last year, Dr Jamilah noted there was no significant increase in the total number of HFMD cases reported.

Last year, the upward trend started early in the year, whereas this year showed a reverse trend, she pointed out. She said so far no severe cases had been reported but advised parents to take precautions.

“Parents should consult a doctor early if their child has fever, mouth ulcers and rashes on the palms, soles or buttocks. Children with HFMD should remain at home until all the blisters have dried up. During this period, contact with other children, including siblings, should be avoided until the child recovers. The child should not be brought to any public or crowded places,” Dr Jamilah stressed.

On a related matter, she said so far, 22 preschools and kindergartens in Sarawak had been closed due to HFMD.