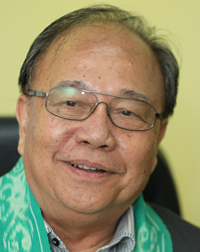 MIRI: Deputy Rural Development Minister Datuk Henry Sum Agong is keeping a close eye on the latest developments and issues arising in Sarawak through media reports and information channelled to him during the Movement Control Order (MCO) to curb the spread of Covid-19.

He commended all those in the frontline, including food assistance distribution volunteers, for their efforts and sacrifices during this difficult time faced by the country.

Despite being in Putrajaya, he was aware of the hard work and efforts of those who played their part to help alleviate the hardship and difficulties faced by the people, particularly in distributing aid from the state government, Deputy Chief Minister Datuk Amar Awang Tengah Ali Hasan and himself which are done in two phases in northern Sarawak.

Lamenting that he is unable to be with Sarawakians during this difficult time due to official duties, Henry thanked the media for keeping him and the nation informed of the latest happenings throughout the state.

“I am following closely the happenings in the state through the media reports which my office assistants send to me every day – from the north to the south of Sarawak,” he said.

He called on volunteers from PBB Bukit Sari and Ba Kelalan branches to be mindful of the standard operating procedures in distributing Sarawak Ku Sayang aid.

Meanwhile, he advised people in Limbang Division wishing to contribute to alleviating the burden of the people to register their organisation or association with the secretariat of the divisional disaster management committee chaired by Resident Ir Ahmad Denney Ahmad Fauzi.

“This is to avoid overlapping of aid while facilitating better distribution of the aid,” he said.

Henry, who is also Lawas MP, said the divisional committee overseeing Limbang and Lawas districts advocates transparency and documents all assistance for reference to the Malaysian Anti-Corruption Agency (MACC).

He said the question of misconduct and unsubstantiated allegations on the amount and type of aid would not arise as each district has its own ways of distribution due to peculiarities in location, geography and population.

“We are open and transparent in managing all the aid throughout the MCO,” he said.

The Lawas MP reminded his constituents to continue complying with the MCO and ensure that Lawas remains Covid-19 free. On social media, he urged users to be prudent in uploading information to public domain as they are ultimately responsible for any false information and slander under the Malaysian law.