A grandson to the Red Bull energy drink founder has been arrested after he fatally hit a policeman with his Ferrari and dragged the dead body down a Bangkok street in an early-morning hit-and-run, police said Monday. 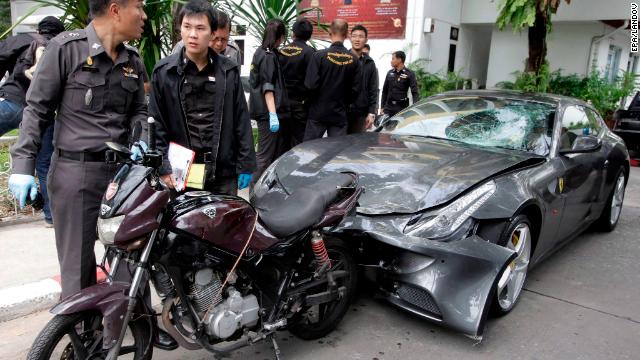 Police took Vorayuth Yoovidhya, 27, for questioning after tracing oil streaks for several blocks to his family’s gated estate in a wealthy neighborhood of the Thai capital. With the presence of a family lawyer, the police searched the grounds and found the damaged Ferrari, which was taken to the Thing Lor police station as evidence, the Bangkok Post reported.

Vorayuth admitted he drove the charcoal gray sports car but said the police officer’s motorcycle abruptly cut in front of his vehicle. He was facing charges of causing death by reckless driving and evading arrest by police, but was released on a 500,000 baht (US$15,900) bail.

Bangkok’s top police official, Lt. Gen. Comronwit Toopgrajank, said he took over the investigation after a lower-ranking policeman initially tried to cover up the crime by turning in a bogus suspect, a Yoovidhya household employee who tried to take responsibility. Comronwit himself led a team of officers to search the compound of late Red Bull founder Chaleo Yoovidhya, one of Thailand’s wealthiest men before he passed away this year, and confiscated a Ferrari with a badly damaged front bumper and broken windshield.

The victim, Sgt. Maj. Wichean Glanprasert, 47, was killed during a motorcycle patrol before dawn. Thai media reported that the car dragged the officer and his motorcycle for several dozen meters as it sped through the residential neighborhood.

Comronwit said he suspended that police officer who attempted to subvert the investigation. “A policeman is dead. I can’t let this stand. If I let this case get away, I’d rather quit,” he told reporters. “I don’t care how powerful they are. If I can’t get the actual man in this case, I will resign.”

Vorayuth did not speak to the media but the family lawyer said his client was still in shock and that he was prepared to offer funeral expenses and compensation, the Bangkok Post reported. The Yoovidhya family was ranked the 4th richest in Thailand this year by Forbes magazine, with a net worth of $5.4 billion. Red Bull creator Chaleo Yoovidhya died in his 80s in March, leaving his heirs a wide range of businesses, including shares in the globally popular energy drink brand, hospitals and real estate. The family also co-owns the sole authorized importer of Ferrari cars in Thailand.

Red Bull is the most popular energy drink in the world, with 4.5 billion cans sold each year.