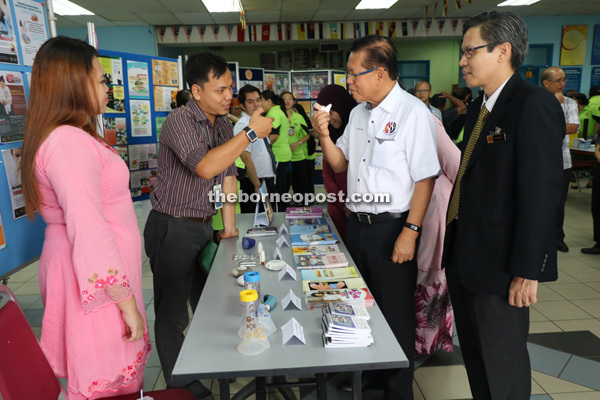 (From right) Dr Maurice and Lee visiting the exhibition.

MIRI: The Tudan Health Clinic (KK Tudan) in Senadin has set up the first Senior Citizens Club in Miri Division, a step in the right direction to fill time during old age.

The National Statistics Department projected that Malaysia will reach ageing nation status by 2035 when senior citizens make up 15 per cent or 5.6 million of its population.

Last year, senior citizens aged 60 and above made up 2.8 million or nine per cent of Malaysia’s population of 31 million and in areas

According to officer in charge of KK Tudan, Dr Maurice Steve Utap who is a Family Medicine specialist, the figure accounted for four per cent of the population in the area and the number was expected to increase by 2020.

“Record showed that some 3,567 of these senior citizens seek treatment every month at our clinic while the total number of outpatients recorded was 9,379.

“Thus senior citizens accounted for 38 per cent of the total patients treated and the trend is worrying and they are prone to chronic diseases,” he said at the launch of the club yesterday by Datuk Lee Kim Shin, Assistant Minister for Land and Air Transportation and Safety.

Dr Maurice, however, said the increased population of senior citizens was a good sign that people live longer due to economic development and advancement in the health industry.

“We want not just quantity but also quality because senior citizens are prone to chronic diseases like diabetes, high blood pressure and heart-related diseases.

“Thus it is hoped that this club would serve as another platform to hold activities to promote healthy lifestyle – that is maintaining optimum social, mental and physical health,” he said.

Meanwhile, Lee in his speech commended Dr Maurice and staff and pioneering members of the public for setting up the club.

“This is very timely as Malaysia too is not spared from problems of ageing society. The World Health Organisation projected that by 2050 the population of senior citizens will surpass the population of those aged 15, the first in world history,” said Lee, who is patron of the club and chairman of KK Tudan Board of Visitors.

Lee, also Senadin assemblyman, suggested that sub-committees of the club be set up in areas like Permyjaya, Tudan, Kuala Baram and Desa Senadin to get more senior citizens become its members.

At the function, he announced a grant of RM10,000 for the club to carry out its activities like exercises, health screening, and religious, social and recreational programmes.

A retiree, Suni Jundi, 66 was elected as the first chairman of the club which has 17 pioneer members.

For further details, contact Suni at 013-8215752 or come to KK Tudan during office hours and look for Linda Blance, an occupational therapist. Membership is free.

During the launch, several activities were held. They included health screening, exhibition, game and exercise demonstrations.

Several members of the public interviewed supported the setting up of the club.

“Marvellous idea and I am looking forward to become member. Through this club the members and health personnel can interact and work out activities for healthy living like how to slim down,” said housewife Rebecca Nur Al Islam, 50.

Agenesia Senaun, 66, a member of the Senior Citizens Activity Centre (Pawe) Krokop, said “My experience being active in Pawe also helped me to keep fit and healthy. We have many activities like dancing, cooking demonstrations and this club too could do likewise”.

Michael Oyai Ambot, a retired mechanic of Public Works Department, suggested “More clubs like this should be set up to encourage seniors like us to come out, exchange ideas and views on healthy living. When we are healthy we are happy and it is also good for ourselves and family members who care for us”. 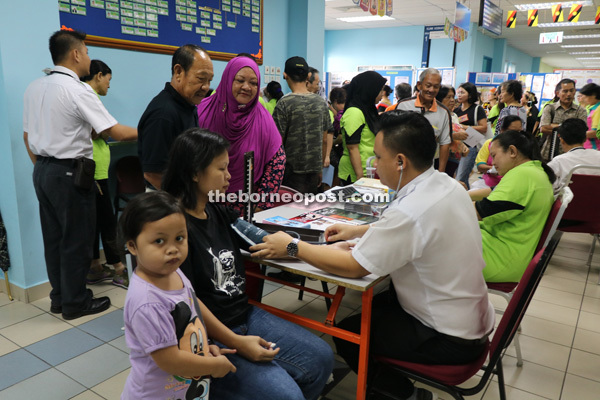 Suni and wife Rebecca (standing at left) waiting for their turn to have their health check.