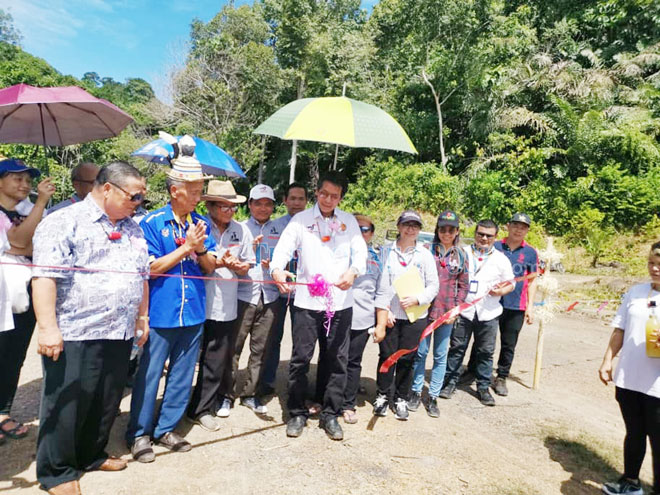 Dennis cuts the ribbon to mark the completion of three RTP projects in Long Pillah.

According to him, all the works costing RM5 million would cover various projects such as construction/improvement of village multipurpose halls, drainage, village roads, and also church buildings.

“Funded by the state government, these projects were supposed to kick off early this year, but due to the enforcement of the Movement Control Order (MCO) that took effect on March 18 due to Covid-19 pandemic, the works had to be put on hold.

“But now under the Recovery MCO, I’m very happy to announce that all these projects are ready for implementation soon,” he said in a statement, issued yesterday to update the public about the progress of RTP projects slated for his constituency this year.

Dennis pointed out that since the RTP for Sarawak was introduced in 2016 by then-chief minister, the late Pehin Sri Adenan Satem, Telang Usan had received over 200 RTP projects – the majority of which had reached completion.

“These people-oriented projects under RTP have indeed brought transformation and changed the landscape of all longhouses and settlements in Telang Usan.

“This could only be achieved by a state government that has strong leadership and stable governance.”

On Friday, Dennis officiated at a thanksgiving ceremony to mark the completion of three RTP projects – a new community hall, a new village road and upgraded drainage – in Long Pillah, which is one of several villages in Ulu Baram.