Halal awareness among Sarawakians on the rise 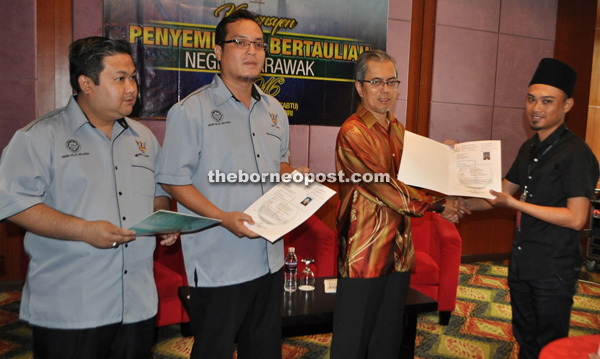 Ismail (second right) presents a certificate to a representative of Borneo Farm Sdn Bhd. Second from left is Khalipah.

MIRI: Awareness among Sarawakians including non-Muslims on halal matters is reportedly on the rise since the launch of Halal Certification Procedure in the state in 2014.

“It is true there are still many communities that have ignored the subject (halal and non-halal) including Muslims themselves. However, the situation has improved much, particularly among non-Muslim traders. They are now more sensitive of the need for Muslims to get halal food products,” he said when he officiated at Sarawak qualified butcher convention here yesterday.

Ismail said based on Jais’ latest record, there were 518 active premises in the State that had obtained the certificate.

He added the halal issue had now become a hot topic; frequently highlighted in print and electronic media.

“After the launch of the Halal Certification Procedure, the feedback from the people on halal is very encouraging.

“The perception of the people in the State on halal issue has changed and they are now more conscious of the subject.”

In efforts to enhance people’s understanding on halal issue and the procedure of obtaining halal certificates, Jais, he added had used alternative medium such as halal hotline, halal website, facebook account under Halal MIS and consultation services.

These alternative mediums had received positive response from the people who wanted to get further information.

On slaughter houses, Ismail said 28 of them in the State had applied for SPHM certificates and certified butcher certificates.

Slaughter houses for chicken has the highest number with 23 premises, quails (three) and two each for cows, goats, camels, buffaloes, deer and ostriches.

He said the certificates of 176 butchers in the State registered with Jais were still valid.