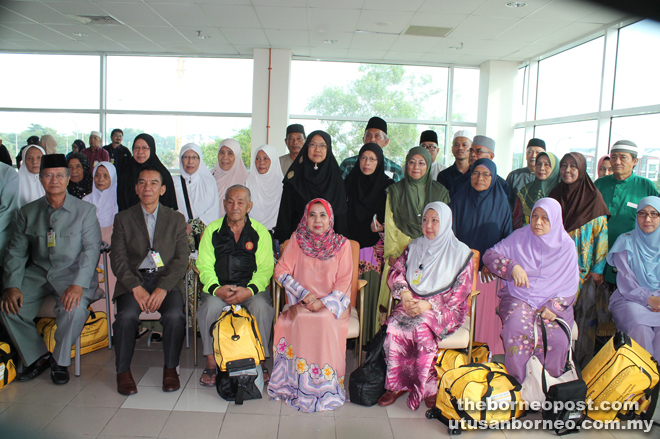 Rosey (seated centre) with the pilgrims from Miri prior to their departure.

MIRI: Pilgrims going to Mecca for the Haj have been reminded to drink more water to avoid dehydration.

Assistant Minister for Solidarity Rosey Yunus said apart from mental and physical preparations, pilgrims must also be prepared to face the hot weather in Mecca and Madinah.

“Haj pilgrims are reminded to bring water wherever they are going in Mecca and Madinah and work together with other pilgrims if they encounter problems,” she advised when seeing off Haj pilgrims from Miri yesterday.

Rosey called on the pilgrims to contact Tabung Haji officers if they feel sick or dehydrated when performing their prayers and during the journey from Madinah to Mecca.

The Bekenu assemblywoman also reminded pilgrims to adhere to Tabung Haji’s rules and regulations so that their journey will be smooth and safe.

A total of 34 pilgrims travelled from here to Kuching for the journey to Jeddah.