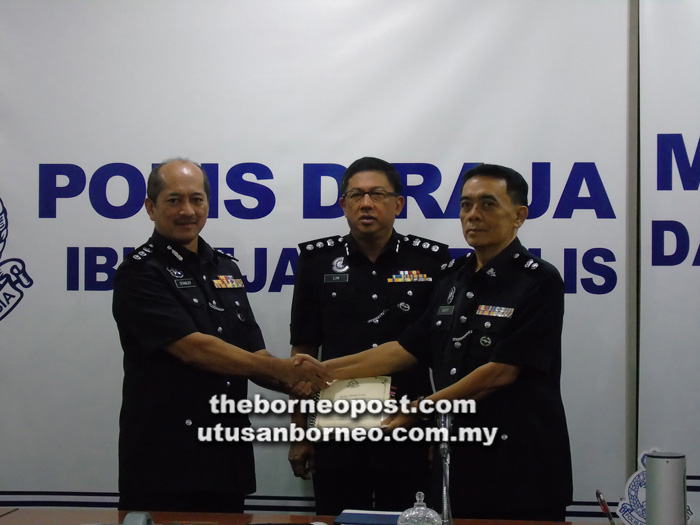 Stanley (left) hands over duties to Hafipi witnessed by Lim.

The former Meradong police chief takes over from ACP Stanley Jonathan Ringgit, who has been promoted to Sibu police chief. Hafipi has served with the police for 35 years.

“I have served in several divisions including Bukit Aman, Terengganu, Kuching and Sibu, and this is the first time serving in the northern part of Miri.

“In terms of execution of duties, I will continue with the tasks as I was told to improve the image of Miri IPD (district police headquarters) in the eyes of the local community and continue to fight crime. I believe with the cooperation between us and the guidance of our police chief, it is possible for us to succeed. Though the leadership pattern may differ, its objective remains the same – to combat crime,” he said.

Miri police chief ACP Lim Meng Seah, who witnessed the hand over, said the number of crime cases in Miri District declined slightly last year compared to 2016. He said 978 cases were recorded in 2017, down 15 per cent from 1,145 cases the previous year.

“Housebreaking, vehicle theft and robbery were among crime cases that declined the most,” he said.

Lim attributed the drop in crime to the commitment of his personnel and cooperation from the public.