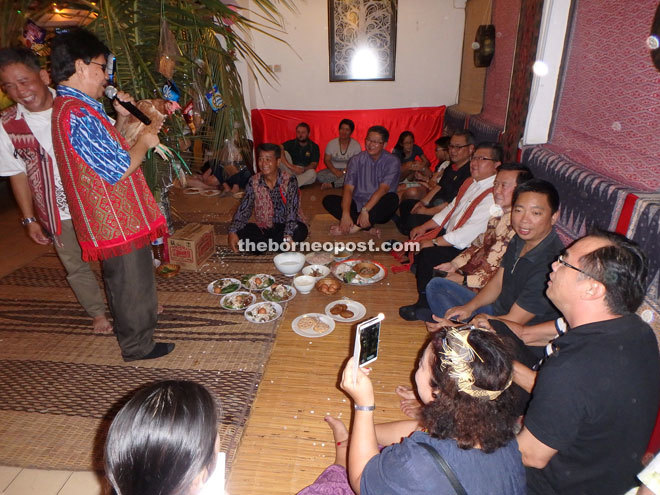 Ganing Asan performing the ‘miring’ and ‘bebiau’ ceremony before the start of the Gawai. ‘Bebiau’ literally means the swaying of cockerel to bless the celebration, followed by poems of good luck.

MIRI: It has become the tradition for Gymkhana Club Miri (GCM) to celebrate the ‘Gawai’ (Dayak Harvest Festival), to respect its staff of the Dayak community.

Usually, the event is held before the actual date of the festival which is June 1.

This year, the pre-Gawai gathering was held on May 27, at the club’s ‘Kenanga Lounge’, attended by over 100 revellers comprising members and their families, friends and close associates of various races and religions.

The club’s honorary secretary Vincent Lu, was the guest of honour to officiate at the start pre-Gawai which began with a ‘miring’ ceremony.

In his speech, Lu thanked the management team and staff for their good work, team spirit and cooperation.

“Understanding and cooperation among everybody is vital to ensure all missions and visions are achieved.

“And with this, I wish everyone present a happy Gawai with good health, longevity, joy and happiness”.

Lu hoped the club would come up with more social activities, including for children such as swimming, games, movies, drawing and colouring contests as what had been held in the past.

He believed that it would attract more people to the club to join as members and participate in its activities. GCM general manager Murugayah Veloo, and account supervisor Siguru Lasor, were among the revellers.

Besides the buffet dinner, there were karaoke sessions, performances, ‘Ngajat’ (Dayak traditional dance) and games.

GCM is one of the oldest heritage clubs in the city, founded and operated by a team of Shell expatriates in 1913.

It was called ‘Gymkhana Club’ to remind members that in those days of oil exploration, the company mainly used horses as a mode of transport.

At that time, the club provided ‘fun and games’ and attracted Shell employees who used horses as a means of moving around.

Now it is one of the popular social centres in the city.