Greece: They say Europe is bad, but still so many illegals!

Greece has been hit by a devastating wave of illegal immigration as a result of the chaos induced by the Arab Spring uprisings in Middle East, North Africa and the continued instability in South Asia, according to Greeces Ambassador to the United States Christos P. Panagopoulos. For a country of 10 million, to have 1 million immigrants, most of them illegal in a period of hardship and economic crisis, its devastating, he told editors and reporters of The Washington Times. 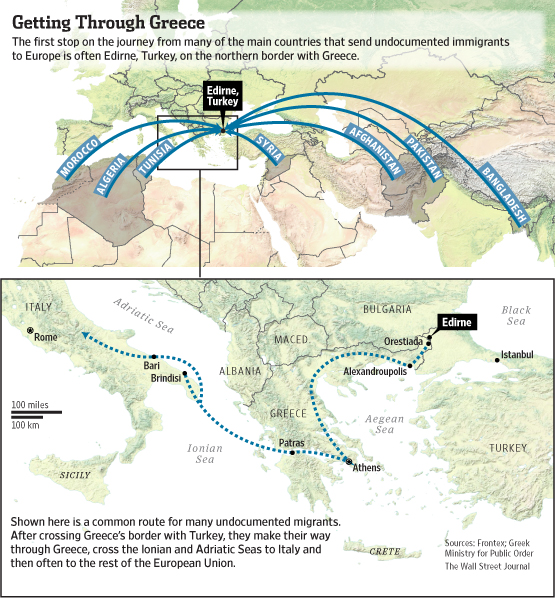 Illegals all gather in Turkey, then enter Greece through there

Greece, suffering from economic upheaval because of a huge national debt, has imposed stiff austerity measures, precipitating a recession that has left the country with an unemployment rate of more than 25 percent and public unrest. Mr. Panagopoulos said most of the illegal immigrants came from countries in destabilized regions, like Pakistan, Afghanistan and more recently Libya and Syria, the latter engulfed in a 23-month-long civil war. Most entered Greece through Turkey.

Unfortunately, our Turkish friends are not very cooperative on this issue, he said. Most of these people do not see Greece as their final destination. They are not aiming to stay in Greece because they know there is an economic crisis. They use Greece as a transit point to other European countries… and eventually to Germany, which is where most of them hope to get to, he said.

But the ambassador said that barriers such as the Balkan mountains to the north and border control agents on the ferries to Italy block their goal of reaching Germany. Ninety-nine percent, they stay in Greece, he said. Because many claimed asylum under international refugee conventions, they cannot be legally deported without a lengthy and expensive legal process. While they remain, Mr. Panagopoulos said, They have needs for food, shelter and clothing. 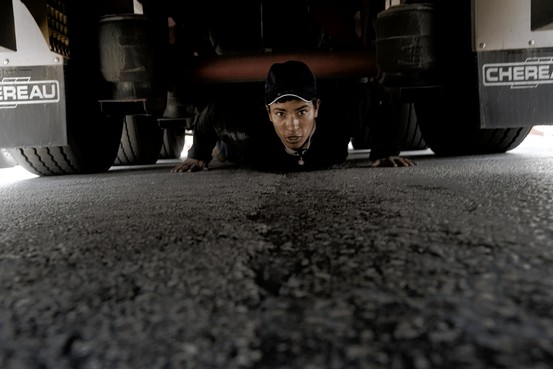 Under the current circumstances, Greece cannot afford this burden by itself, he said, adding that Greece has raised the issue with European Union officials. Up to now, let me say cynically, that we get all the good words; but when it comes to practical measures, we dont have that much support, he said of Greeces EU partners. Greece has also failed to persuade other European nations that the wave of illegal immigration is also their problem.

If you reside in France or the Nordic countries, you will think, Oh, its a bad thing, but it doesnt affect me, he said. More than 22,000 people were caught trying to cross into the European Union in the last three months of 2012, with nearly 9,000 of them attempting to come through the Greek-Turkish frontier, according to the EU border-control agency Frontex.

Mr. Panagopoulos said up to 300 people every day successfully cross the Turkish border into Greece illegally, calling the number the equivalent of the population of a small Greek village. It is a village every single day, he said. Its devastating for a small country such as ours. Many of them are coming as a result of the aftermath of the Arab Spring, the ambassador said. 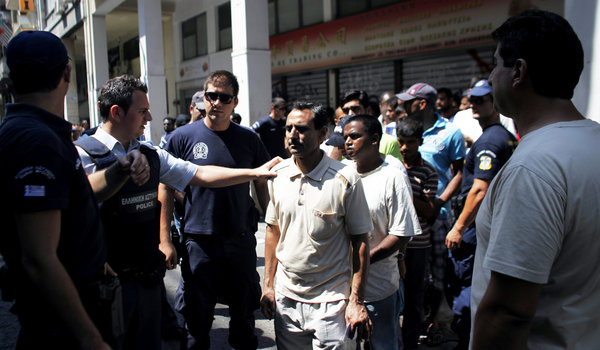 According to Frontex, the most common nationalities caught trying to enter the EU in the first half of 2012 were Afghans, Algerians, Bangladeshis and Pakistanis. But later in the year, Frontex detected a huge jump in the number of immigrants from Syria. This is a new crisis for Greece, as a country who risks running out of cash anytime, it couldn’t possibly stretch its financial resources accommodating these illegals.

Aside from economic factors, the illegals are also straining Greeces relationship with its EU peers. Greece is part of Europe’s so-called Schengen zone, which allows passport-free travel among most EU members. Its failure to protect its border has only heightened political tensions with countries already resentful about Greece’s impact on the euro. Hugo Brady of the Centre for European Reform, a London-based think tank, says it is all just fanning a “poisonous” political atmosphere.

That has already began: Austrian Home Affairs Minister Johanna Mikl-Leitner has described the Greek-Turkish border “as open as a barn door,” and her government maintains that shutting Greece out of Schengen should remain an option. Germany, Finland and the Netherlands also have repeatedly voiced concerns about the Greek border. Diplomats say they are likely to back plans to reintroduce passport checks for travelers arriving from Greece, effectively isolating it from the rest of the Schengen zone. Illegals demanding better conditions, Greece says it has no more money catering to that

During one hot day last summer, out of the gates at Fylakio walked 26-year-old Monir Isam from Bangladesh, smiling because he had made it to Greece, but with a harrowing tale to tell nonetheless. Bound for Athens, he said he spent two months traveling by car, bus and boat, stopping in Dubai, Iran and Turkey. He had paid smugglers 7,000 in Bangladesh, and upon arriving at a river in Turkey, was told to jump into a small plastic boat, similar to those sold at toy stores for suburban swimming pools. Sixteen other men jammed in with him.

Asked what he would do if he couldn’t find work in Athens, he said, “I have to find a job, I’ve paid too much.” In a phone conversation in late July, Mr. Isam said he was staying at a derelict apartment building in central Athens, supporting himself on menial jobs and having no plans, or means, to leave. “Where would I go?” he said. “I can’t go back to Bangladesh. It would be shameful.”

At a cafe at the Alexandroupolis train station, a man who identified himself as a smuggler from Algeria, described the illegal-immigration class system. Syrians are the richest and are willing to pay 10,000 to reach Norway, Finland or Sweden for asylum. He said he charges 5,000 for a fake Greek passport and 1,500 to just cross the river.

On the other hand, the poorest Bangladeshis are being lied to by smugglers about their prospects in Greece, he said. “They tell them they’ll be kings in Athens,” he said. “But when they get there they see there’s no kingdom.” The man, who calls himself Nassim, said he has been in Greece for five years, smuggled there himself. Ms. Malmstrm, the EU Commissioner for Home Affairs, said trafficking like this into Europe has become a 25 billion-a-year-industry, so lucrative it is hard to combat.