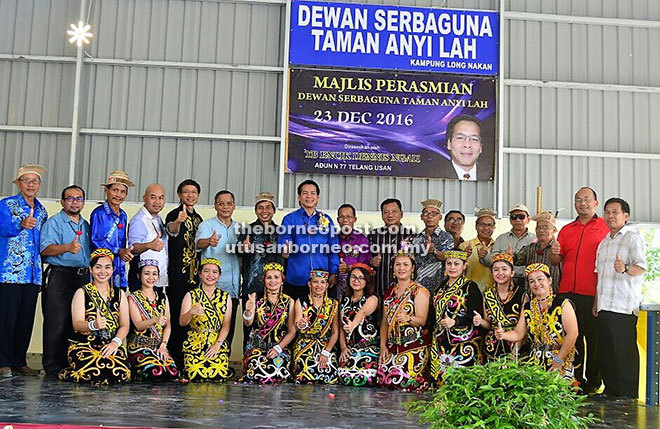 Dennis (standing 8th left) and other guests in a photo call after the official opening of the hall.

MIRI: The government is serious in its efforts to uplift the standard of living of the rural populace.

This can be clearly seen through the approval of projects under the Rural Transformation Programme (RTP) in all state constituencies under Barisan Nasional (BN), Telang Usan assemblyman Dennis Ngau said.

Besides that, all BN elected representatives have been doubling up their efforts to achieve that objective, Dennis added.

Dennis also talked about provision of solar energy to Telang Usan, which he said would be one of the game changers in 2017 for the constituency.

“The provision of solar electricity will be in stages due to its huge cost, so I urge people in my constituency to be patient,” he said.

On Long Nakan, Dennis praised the longhouse leadership for their strong support for BN.

He urged them to uphold the spirit of cooperation and work closely with the elected representative for the good of their people.

He applauded the effort and request put up by village headman Andrew Jau Anyie and his committee for government consideration.

“That should be the way a headman carries his responsibility, by having a meeting to discuss and make short or long term planning for the development of the longhouse.”

Later, the assemblyman announced MRP grants of RM10,000 for BEM middle Baram to organise a youth gathering in 2018 and RM5,000 for their church.

He promised to seek more funds to complete the community hall.

Long Nakan is a 50-door longhouse with more than 300 residents.