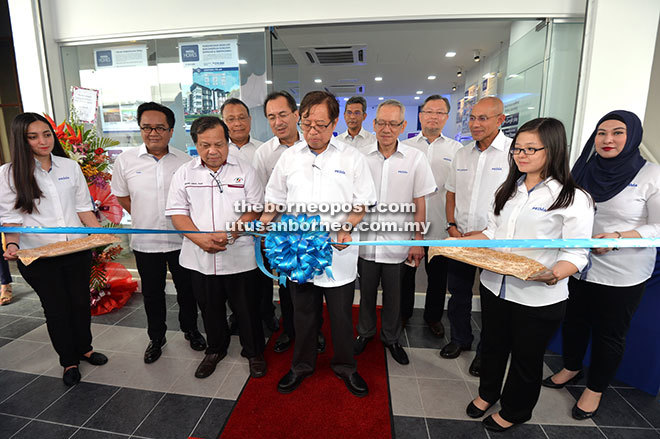 Abang Johari cuts the ribbon to mark the launch of PR1MA Sarawak office and sales gallery in Kuching. Behind him on his right is PR1MA chief executive officer Datuk Abdul Mutalib Alias.

KUCHING: The intervention from the government will ensure that those from the middle-income group – referred to as ‘B40’ that comprises 60 per cent of the country’s population – are able to purchase houses as this group is not eligible for affordable housing.

Deputy Chief Minister Datuk Amar Abang Johari Tun Openg acknowledged that those under the B40 bracket found it really hard to own houses nowadays.

“We received feedback from the common people, saying that the (prices of) houses are really beyond their reach. In Miri, such houses go for above RM300,000 per unit, while the Samarahan folk complain about the terraced units being priced well over RM450,000,” he told reporters at the launch of Perbandanan PR1MA Malaysia (PR1MA) Sarawak office and sales gallery here yesterday.

The government, as a way to enable people own houses, would announce a new policy and type of houses to be developed during the upcoming State Legislative Assembly (DUN) sitting, which commences tomorrow.

As a measure to trim down the prices, the government would use state land and form landbanks to reduce the cost of land – a key factor that affected the prices of houses, said Abang Johari who is also Housing and Urbanisation Minister.

He also pointed out that PR1MA should be able to accommodate the demands of the people by offering affordable houses amidst decent facilities and quality neighbourhood.

For the record, the PR1MA@ Kuala Baram in Miri, which has 1,896 units, has been approved.

However, such development has led to some developers claiming that they are being discriminated in that the special consideration is being given to PR1MA and relevant agencies as far as housing development is concerned.

In response to this, Abang Johari said it was certainly not the intention of the government to discriminate against private developers.

“They (private developers) must match the standards set by the PR1MA for the houses, which must be affordable to the targeted low and middle-income groups.

“You build the houses and the prices must be like those under PR1MA. If PR1MA (houses) have green fields, facilities for the people and quality (neighbourhood), then you need to provide the same, with prices within RM255,000 but not more than RM300,000.

“I said I would convince the chief minister on giving the same treatment (to private developers) as that to PR1MA – provided that the housing neighbourhood is of the same quality as those developed under PR1MA.

“The facilities too must be the same, and the surrounding environment must be upgraded,” he stressed.

Meanwhile, Abang Johari also insisted that going forward, the development of all three to

four-storey housing blocks should include elevators to ensure the ease of
occupants in the future.

“Imagine you bought a flat on the third floor when you’re in your 30s – 20 years later, how would you carry a tank of cooking gas up to your quarters if there’s no lift?

“Usually when people buy houses, they will not move. We look into the future as people get older.”

In this regard, Abang Johari also stressed about the importance of maintenance of elevators to ensure that they would continue to be working at all times.

On the same note, the minister said a bill would be passed in DUN next week, on the requirement for high-rise buildings to have fixed gas distribution pipes to each unit, which would eliminate the need for cooking gas tanks.

“This will ensure automatic supply of gas to each unit, with separate meters – it is up to PR1MA to adopt it,” said Abang Johari.