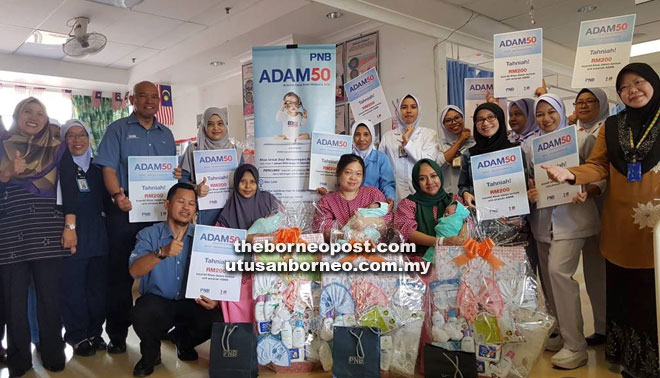 Women with their respective New Year babies in a group photo with SGH staff members, who are seen holding placards on ADAM50.

KUCHING: Forty-four babies were born after the stroke of midnight of Jan 1 at government hospitals across Sarawak.

According to her, these New Year babies in Sarawak would be among the first batch to receive the ‘Amanah Dana Anak Malaysia 2050’ (ADAM50) – a special RM200 incentive that comes in the form of unit trust.

It was intended to kick off on Jan 1 this year, as announced by Prime Minister Datuk Seri Najib Tun Razak in his tabling of Budget 2018 last October.

Meanwhile, Griff Joyner Lois who gave birth to her first child at 3.35am in SGH, welcomed the implementation of the ADAM50.

“With ADAM50, it will serve as a great preparation for the children to start saving and investing from the moment they are born.

“I am really grateful to the government for introducing this incentive, which will no doubt benefit my child,” said the 26-year-old.