Government falls, Egypt in anarchy, US may send in soldiers

As Egypt’s military toppled the country’s first-ever democratically elected president, many observers braced to see whether Mohamed Morsi’s Islamist followers would resort to violence as they said they would. Radical Islamists such as Mohamed al-Zawahiri, a leader of Egypt’s radical Jihadi movement and the brother of al-Qaeda leader Ayman al-Zawahiri, promised his followers Wednesday they would have “the upper hand” should the military follow through with its threatened coup. A day earlier, Morsi made a speech promising to defend his right to the presidency with his blood.

In Morsi’s hometown of Sharqiya, the Salafi Jihadi organization issued a statement supporting the president and declaring “war against the armed forces” who would oppose him. The group’s leader, Shalabi al-Awady, accused the Liberal Muslim opposition of apostasy. “They are at war with the application of Sharia, which makes them apostates who should be killed in order to prevent sedition,” al-Awady said, according to the paper.

Morsi had said in a speech Tuesday night that “If protecting the legitimacy (of the electoral results) requires my own blood, then I am willing to do this.” His speech “was an open incitement to violence,” said Michael Wahid Hanna, an analyst at the Century Foundation, a think tank in Washington. State Department spokeswoman Jen Psaki said violence is a concern, and urged all sides to talk to each other. “We’re clearly concerned about the violence on the ground and the fact this is an extremely tense situation,” Psaki said.

With Egypt in anarchy, a contingent of the US Marines in Africa has been moved to Sigonella, Italy, for possible action in Egypt. “This (deployment for missions into Egypt) is certainly one of the possibilities of the (task force),” Marine Captain Eric Flanagan, a spokesman based at the Pentagon, said in an email. “The unit is always on standby with a short tether.” The 500-member Marine unit could be called on to swoop in and help secure the US Embassy in Cairo.

http://www.stripes.com/polopoly_fs/1.210893.1368632587!/image/image.jpg_gen/derivatives/large_article/image.jpg
US Marines in Spain and Italy on standby to enter Egypt

“The reason we are here is to provide a scalable force to respond to unexpected crisis,” Major Zane Crawford, unit’s operations officer, said. “We can rapidly deploy to support missions, such as embassy reinforcement, tactical recovery of aircraft, and personnel and noncombatant evacuation operations.”

The Wall Street Journal reported that US military officials have pleaded with military leaders in Egypt not to conduct a military coup, as under US law, that would immediately trigger a stop to foreign aid. Egypt is the second-largest recipient of US foreign aid money, after Israel, and the cutting of such aid threatens an economic disaster.

CNN reports that the Marines in Italy and Spain are poised to be airborne within an hour of getting orders to deploy to Egypt: “The units have several V-22 tilt-rotor aircraft that would carry troops and infantry weapons to Egypt to protect the U.S. Embassy and American government personnel and citizens if violence broke out against Americans.” 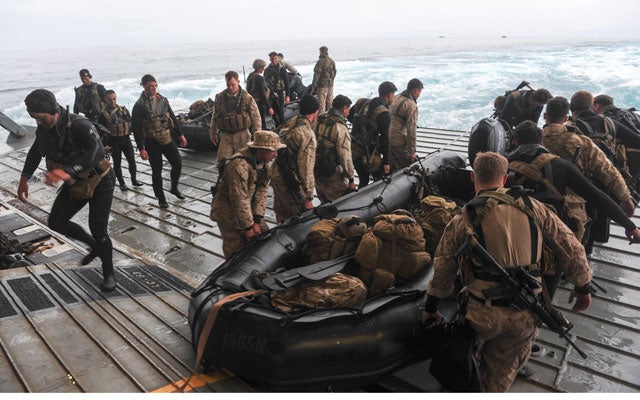