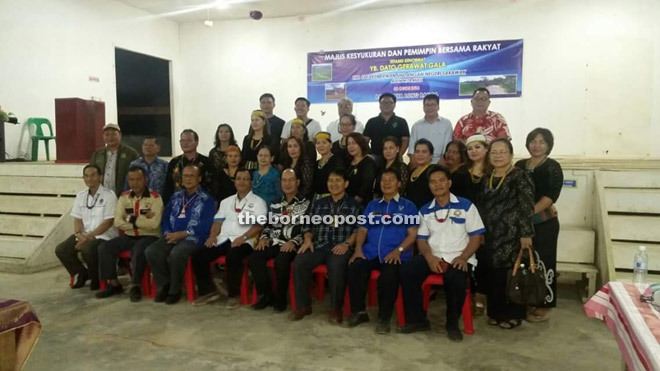 MIRI: The Orang Ulus in Long Banga regard Mulu assemblyman Datuk Gerawat Gala as ‘the right choice’ for the rural constituency.

PBB Youth Mulu chief Usat Biloy, in speaking on behalf of the community, said Gerawat continued to visit the longhouses in and around Long Banga such Long Peluan, Long Beruang, Long Pulung, Long Balong and Long Lemai, after having won in the last state election.

“The folk here have responded positively to Datuk Gerawat and they have also voiced their undivided support to him, pledging to work together with him towards developing this constituency further,” Usat said when met during a recent function in Long Banga, where Gerawat was the guest-of-honour.

Usat said Gerawat had assured the people of Long Banga of incoming development to be brought in by the Barisan Nasional (BN) government.

“The assemblyman said this (development) would come in stages. He (Gerawat) also highlights the need to have road connectivity, including bridges, for the villages in Long Banga.”

Usat also disclosed that Gerawat had applied to MASwings for increased daily flight frequency for the Miri-Mulu route, from the current two to three flights.

Later at the function, Gerawat announced allocations from his Minor Rural Project (MRP) grant worth RM30,000 for the construction of the pastor’s house at Long Banga church, RM5,000 for Long Banga security and development committee (JKKK), and RM3,000 each for the JKKK of Long Peluan, Long Beruang and Long Balong.

The assemblyman also presented 35 birth certificates approved by the National Registration Department (NRD) to local villagers, who applied for it early this year.