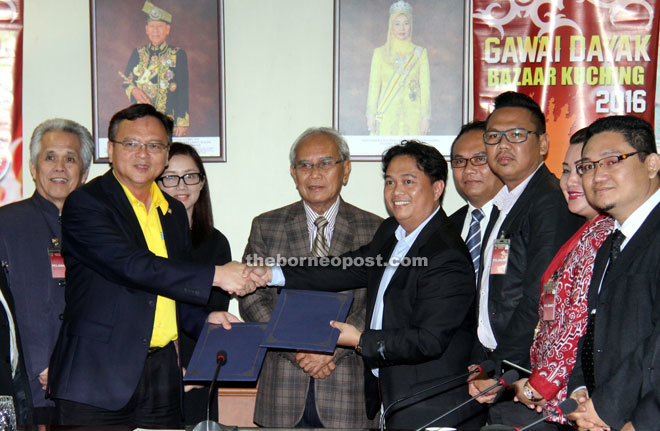 Jabu (fourth left) witnesses the exchange of MOU documents between Lo (second left) and Rogies. — Photo by Chimon Upon

KUCHING: The first-ever Gawai Dayak Bazaar here, to be run by Gagasan Anak Dayak Sarawak (GADS) at Batu Kawah New Township from April 30 to May 22, has the potential to become an economic-multiplier for local businesses, especially those operated by the Dayaks.

It could also attract more participation from local entrepreneurs which in turn enable them to generate extra income.

The site will house some 100 stalls selling various products including food and beverages, as well as handicraft items

and clothing, throughout the period. It will be open from 10am till 10pm daily. Moreover, the closing ceremony on May 22 will feature a parade.

“Most importantly, the collaboration between GADS, MPP and Batu Kawah New Township Owners Association would create good networking among the Dayak professionals and entrepreneurs.

“The Gawai Dayak Bazaar also offers an opportunity for the Dayaks to showcase their culture, handicrafts, delicacies and other native products.

“We believe that as the Dayak community prosper, so is the increase in their purchasing power.

“This will lead to the creation of more business opportunities towards a multiplier effect, which will only do everybody a good service,” he told reporters prior to the signing of a memorandum of understanding (MOU) between GADS and MPP at his office in Wisma Bapa Malaysia here on Monday.

Jabu, who is expected to officiate at the bazaar’s opening this May 14, hoped that the event would become an annual affair.

He also suggested that MPP should seriously consider listing the bazaar on the council’s calendar of events.

In his remarks, Lo lauded the initiative by GADS to commercialise Dayak products through the bazaar.

“MPP is honoured to be associated with GADS in holding an event of such capacity. With the help of MPP, we will strive to make this event a success.

“Apart from showcasing Dayak delicacies, handicraft and other products, this bazaar will also host cultural performances and mini concerts in the evening. The council encourages community development programme and this bazaar has the potential to be a good tourism product,” he pointed out.

GADS first held the Gawai Dayak Bazaar in Miri last year. Following the success of the first edition, the Dayak-based movement will hold this year’s Miri bazaar on May 10-25.