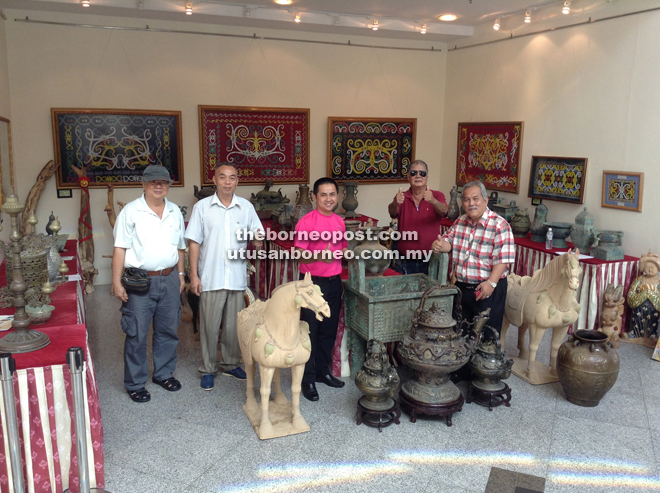 (From left) Law, Lee, Ahmad, Liew and Jaludin with their collections at the antique exhibition at the lobby of Pustaka Miri which kicked off yesterday.

MIRI: Four friends who share an interest in collecting antiques got together to hold a one-week antique exhibition at the lobby of Pustaka Miri starting yesterday from 10am to 6pm daily.

Among antique collections on display are a bronze kettle from China worth RM40,000 and a German-made symphonion music box worth RM25,000.

Both items which belong to Jaludin are over 100 years old.

Others on display from Jaludin’s collection are earthenware from shipwrecks as well as various types of gramophones and an antique lamp.

“I bought most of these items whenever I travelled to places like Indonesia, China, Vietnam, India and Europe,” he disclosed.

According to Jaludin, this is their first exhibition at Pustaka Miri and they have not been active in holding public exhibitions, as collecting the antiques started only as a hobby.

He added that this is also his first exhibition in Miri after he started collecting antiques about 40 years ago.

His last public exhibition was in Kuching last May.

Those patronising the exhibition will be able to see collections of bronze items as well as various decorative items from China aged over 2,000 years old belonging to Law.

Liew, meanwhile, put on display a collection of porcelain horses made during the Tang and Han dynasties.

Both Law and Liew have been collecting antique porcelain dolls and figurines from China for over 20 years.

For Lee, who has been collecting antiques from China for 30 years, ceramic vases are among his collections on display.

“After this, we can have more exhibitions featuring individual collections as a way to promote the interest among the public,” he said.

He added that the ongoing exhibition is held in conjunction with the National Day celebration.

For more information on the exhibition, the public can contact Ahmad at 085-422525.