Forum allocated piece of land for headquarters, expansion of activities 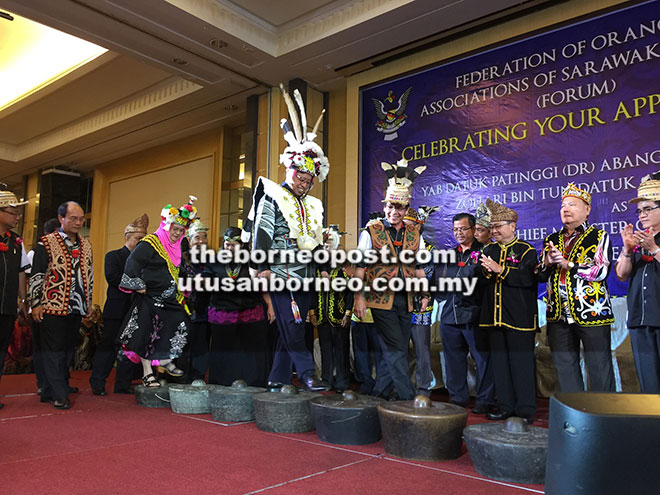 Abang Johari and his wife perform the ‘tawak walk’ on stage.

MIRI: The Federation of Orang Ulu Associations of Sarawak, Malaysia (Forum) is allocated a piece of land for their headquarters here and expansion of their activities.

This was announced by Chief Minister Datuk Patinggi Abang Johari Tun Openg at a special dinner organised by Forum to celebrate and welcome his recent appointment as the state’s sixth chief minister here last Saturday.

Forum is understood to have requested for a piece of state land from Abang Johari’s predecessor the late Pehin Sri Adenan Satem not too long ago.

“We have identified a five-acre piece of land right here in the city for Forum.

“We can put up the building as a symbol of modernity of the Orang Ulu community,” the chief minister said.

Abang Johari commended Forum as a great platform to unite the Orang Ulu people of various ethnicities in order to reach greater heights and allow them to think together on how to develop themselves and the state.

“Together, we can prepare ourselves to participate in the development that have been charted out for Sarawak. Nobody can chart our own destiny except Sarawakians themselves,” he said.

On another subject, Abang Johari said while Sarawak was transforming itself towards a digital economy, there must be initiatives and exposure on various digital technologies to allow the people including the Orang Ulus to stay connected to the mainstream of development.

“There is no other option for us to become a developed society except through digital economy. When the Orang Ulu people are well acquainted with digital technologies like computers and the Internet, their future and the future of the state will be brighter.

“Digital economy will change the way we develop our state as it transcends borders and areas,” he said.

He pointed out that the highland areas of the Orang Ulu communities have great potential to be transformed through digital economy especially in agriculture and tourism with the establishment of Highland Development Agency (HDA) and Upper Rajang Development Agency (Urda) under the Regional Corridor Development Authority (Recoda).

“We will plant various cash crops in the highlands and export them through e-commerce.

“Forum thus serves as a great platform that allow us to identify and develop areas in the highlands where most of the Orang Ulus live for the planting of these crops. Basic infrastructure will follow suit,” he said.

Abang Johari also shared some insights on the various initiatives taken by the state government to further develop the state including the state-owned Development Bank of Sarawak (DBoS), state petroleum company (Petros), upgrading of ICT infrastructures, Sarawak Pay, Sarawak Big Data, Sarawak Multimedia Authority, and the establishment of hydrogen unit in view of the potential of hydrogen as a form of renewable energy.

“These are our common vision and what we are doing today is meant for our future generations.

“I hope the Orang Ulu community will stay united in order to transform Sarawak into a high income economy.”

He thanked Forum for organising the momentous event.

“I am blessed to have this opportunity to serve and transform the state together with fellow Sarawakians. Although I am still learning, I will always try to give my best for the betterment of our people and state.

Later at the function, Abang Johari announced an allocation of RM250,000 for Forum to run their future activities.

The highlight of the dinner was the ‘tawak walk’ where Abang Johari walked on eight ‘tawak’ (‘bass’ gongs) on stage accompanied by his wife Datin Patinggi Datuk Juma’ani Tuanku Bujang.