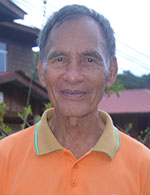 MIRI: In 1963, prior to the formation of Malaysia on Sept 16, and until August 1966, Sarawak and Sabah – then North Borneo, faced an undeclared war known as the Confrontation, which stemmed from Indonesia’s opposition to the formation of the new nation.

Much of the fighting took place in areas between the border of Kalimantan, Indonesia and Sarawak and Sabah.

Among those who experienced the Confrontation first-hand was Penghulu Dennis Yahya Ating – former headmaster of a primary school in Ba Kelalan.

The school – located near the border with Long Bawan, Indonesia – faced threats from mortar fire at least once a week.

“Every time the mortar was fired, the school would close and when the situation calmed down, it reopened because during that time only Ba Kelalan had a school for the convenience of students from several surrounding villages,” he said.

When conditions worsened, he decided to close the school temporarily.

“The situation became so heated that I told myself that I must learn to become a soldier, and at that time there was an intake for Border Scouts training at my village in Long Semadoh,” he said.

“My heart could not stand it. I told myself that I must join the villagers to defend ourselves against enemy attacks. I went back to Long Semadoh to meet the officials expressing my desire to join the Border Scouts.”

However, his application was initially rejected.

“After the officer found out that I was a teacher, they refused because they said I needed to work.

“I told them that I cannot afford to live and see my beloved Long Semadoh and Ba Kelalan continue to be attacked, my wish was then granted,” Dennis explained.

Although they would not provide him with the then 150-dollar training allowance because he was a teacher, Dennis still insisted on signing up.

“I told them that I did not mind to not receive the allowance as it was more important for me to be accepted,” he said, adding that he underwent training in Long Semadoh for a month.

Dennis said during the confrontation, Ba Kelalan and Long Semadoh were filled with British and Gurkha soldiers.

“Among my most unforgettable experiences was when I was on duty in Long Semadoh, we were informed that the enemy infiltrated into Long Luping. The information was delivered by the villagers after they were forced to feed the rebels who were all hungry after a long stay in the woods.

“We then went to Long Luping. In the operation, a Border Scout was shot,” he recalled.

Dennis served as a Border Scout for a month before being asked to reopen the school.

“An education officer from Lawas came to meet me in Long Semadoh. He asked me to reopen the school that had been closed for some time.

“I then returned to Ba Kelalan to continue working as a teacher, but I was always ready to return to work as a Border Scouts if the need arose,” he said.

Now aged 76, the father of eight children aged 27 to 57 still remembers clearly the struggles of defending his country.

“It is important for us to maintain the security and independence we have today.

“In Long Semadoh, many have joined the People’s Volunteer Corps (Rela) to demonstrate our love for our country,” he added.

Dennis now serves as penghulu to 12 villages in Long Semadoh.