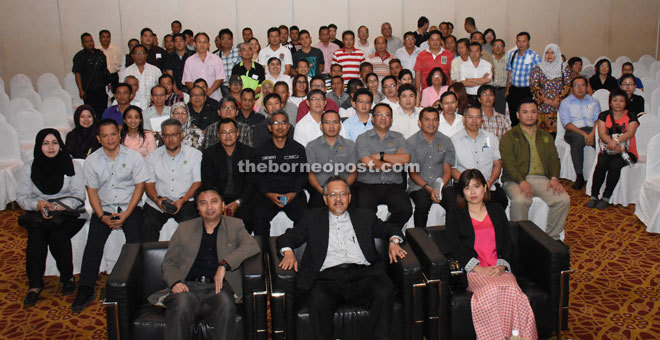 Participants of the briefing pose for a photo session.

SIBU: A major operation will be launched in April to wipe out illegal logging in Sarawak, says state Forest Department director Sapuan Ahmad.

Calling it the biggest statewide operation ever, he said over 400 enforcement officers would be assisted by personnel from Sarawak Forest Corporation (SFC), police and marine police in the operation covering Miri, Bintulu, Sibu and Kuching regions.

“There will be follow-up actions until we can wipe out this illegal activity,” Sapuan said, adding that MACC was also assisting them in the operation codenamed ‘Ops Gergaji’.

He told reporters this after a briefing to sawmill operators here yesterday. Adding on, he said the department was equipped with 29 vehicles, four caravans and 50 guns to carry out their task to tackling illegal logging while urging the public to be their eyes and ears.

He also mentioned that those sawmills sited at agricultural lands had been given a one-year grace period to move to the timber processing zones. He noted there were 513 sawmills in the state that had applied for licences which were told to move their processing area under the legalisation policy.

On the briefing, he said the objective was to inform and remind all downstream operators to use only legal timber for manufacturing and trading.

“Forest Department Sarawak is conducting a series of briefing to all wood-based industries in Sarawak to ensure they are complying with all the rules and regulation pertaining to forestry. All sawmill operators are warned not to buy or process illegal logs or timbers in their mill. Stern action will be taken on those found in possession of unlawful logs or timbers,” Sapuan said, warning of heavy penalties awaiting those who failed to toe the line.

During the briefing, he cautioned that any operators who commits a breach of any terms and conditions of their licence shall be guilty of an offence under Section 62 (6)(b) of Forests Ordinance, 2015 (Chap.71) and upon conviction, punishable with a fine of not less than RM10,000 and not exceeding RM100,000, and in the case of continuing offences, a further fine not exceeding RM5,000 for each day during which the offence continues after conviction.

In addition to that, a person found in unlawful possession of any forest produce shall be guilty of an offence and shall, upon conviction, be punished under Section 96(1) and a fine of not less than RM25,000 and not exceeding RM150,000 or imprisonment not exceeding 5 years or both.

“Subsequent offences, shall be punishable with a fine of not less than RM150,000 and not exceeding RM500,000 or imprisonment not exceeding 10 years or both.

He assured that the Forest Department would continue its close monitoring and strict enforcement to ensure only legal timber entered the supply chain.

“In this respect, we hope all the sawmill operators will not involve in any illegal activities and it is a responsibility for them to ensure their mill premises is free from any illegal logs/timbers,” Sapuan said.