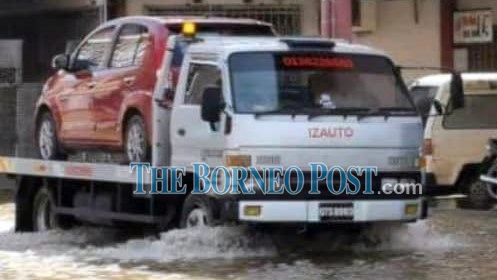 The lorry service owned by Huang transporting users and their small vehicles from Marudi Town Square to the ferry point.

MIRI: The flood situation in Marudi district, as of this morning, showed signs of improvement with most of the flood affected areas reported to experience a declining trend in flood water levels.

Nevertheless, the Fire and Rescue Department (Bomba) here will continue to monitor the situation in view of the changing weather patterns.

Bomba Marudi station chief Maureen Sim said the department is monitoring the overall flood situation in the district with the help of the community leaders and village chiefs who are responsible to report the latest development on flood in their areas to the district office and Bomba.

“Overall, flood water had receded although several areas remained inundated,” she said when contacted, adding her men had been on the ground providing assistance since flooding began early this month.

Sim said the receding water allowed heavy and four-wheel drive vehicles to pass through Miri-Marudi road, although it remained impassable to smaller vehicles.

The ferry service operations remain. However, many residents are left with no choice but to use a lorry service to move their small vehicles from Marudi Town Square to the ferry point, to avoid being swept away by the flood if they continue to drive through at the moment.

According to the service owner Izaac Huang, each trip would cost RM100.

“This lorry service has started since yesterday (Dec 15).

“Many outsiders attended weddings in Marudi last Saturday. So, they had to come back on Sunday to prepare for work the next day. There are also people from Marudi who went out of town and had to return here for work,” he said when contacted this morning.

“So far there is no complaint on the service charge,” he added.

Meanwhile, a news portal has reported that the flood situation in the district has also caused flood victims in Kampung Kuala Tutoh who were cut off from the outside world by floodwaters have been unable to cook as the supply of cooking gas has run out, as well as firewood being the alternative source of fuel were damaged by floodwaters.

“The delivery of food assistance was delivered in two phases – the first was on Dec 11 and the second one is today (Dec 16).

A total of 142 food packs have been distributed in Kuala Tutoh in the second day of operation today.

On a related matter, Bomba Marudi reported that nine individuals, including a baby boy, from two families from Kampung Padang Kerbau have been evacuated to Marudi Civic Centre after their wooden stilt houses were inundated by floodwaters yesterday (Dec 15).

The operation was the first evacuation in the district since the water level in Baram river started to rise early this month due to heavy rainfall.