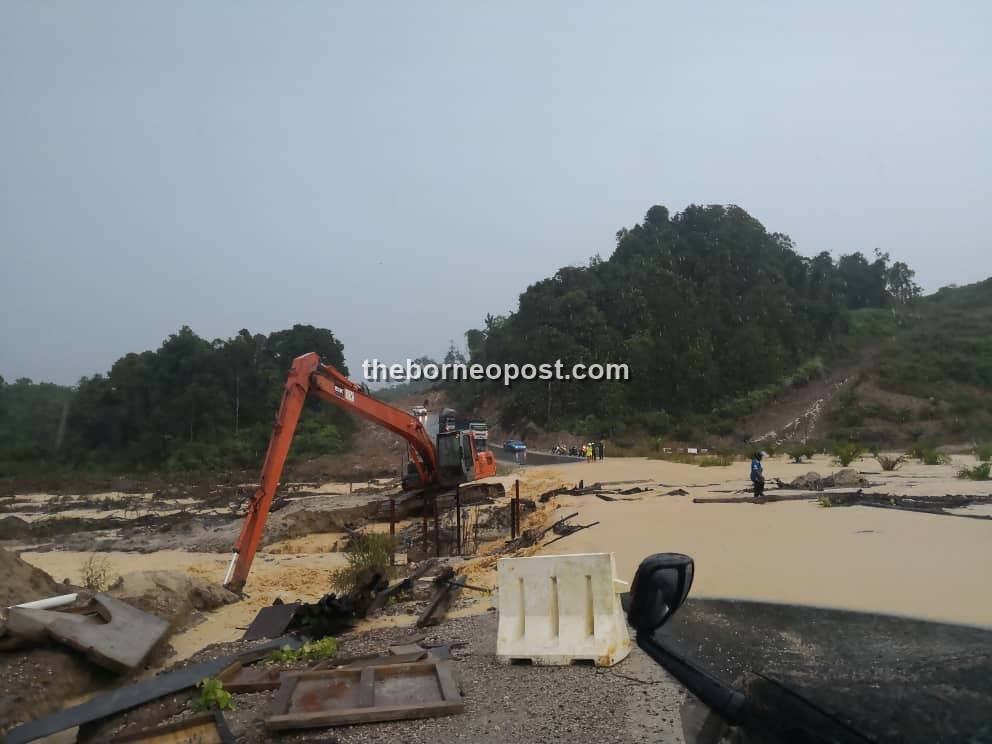 A flooded section of Bukit Kolam along the Miri-Marudi road.

MIRI: The Bukit Kolam area along the Miri-Marudi road here was hit by flash floods today, following torrential rain which lasted for about 45 minutes.

Marudi assemblyman Datu Penguang Manggil said the flooding is believed to have been caused by a combination of factors, including heavy downpour that commenced at around 4.35pm.

“In 2016, Sarawak BN decided to spend an additional RM77.6 million to upgrade the same 43km road.

“The road is at the final stages of completion, and there are significant large and small potholes, a collapsed side road and drains et cetera along the road,” Ting said in a Facebook post.

Ting emphasised that the situation of a section of road after the rain this afternoon was dangerous to life with possibility of road collapsing at any time.

“GPS – please do the real works (sic) , not just crowing daily on newspapers,” he added.

When asked for comments on Ting’s post, Penguang said “Ting only knows how to criticise whatever the state government is doing”.

“To him, nothing is right, even without knowing how much effort we have put in to ensure that the road is done according to the specs.

“If he is so concerned about the welfare of Marudians, ask him to secure more funding from the federal government to upgrade as well as build more infrastructures and get more money to repair the dilapidated schools in Baram,” said Penguang.

Penguang said he believes that almost the entire stretch of the construction of the Pan Borneo Highway suffers from similar conditions after such a heavy downpour.

“Why pick the Miri-Marudi road?

“Ask him to look after his own constituency which I believe has a lot of problems too, and don’t try to be a busybody, finding fault with other constituencies.”