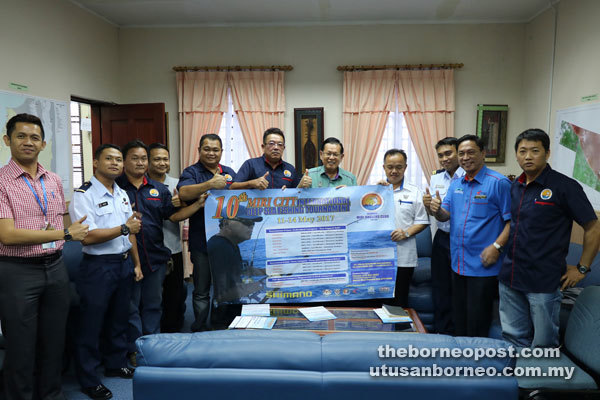 Lee (fifth right), flanked by Antonio on his left and Ting, gives his thumbs-up for this year’s MCIDSFT. At fifth left is Aaron.

MIRI: The local fishing industry players are encouraged to tap the potential presented in the Miri City International Deep Sea Fishing Tournament (MCIDSFT), which has put the city on the world sports tourism map.

The foreign anglers were mostly from China, while the rest were from Brunei, Australia, India, Singapore, England, Germany, Norway, the Netherlands, Iran, India, New Zealand and Japan.

“Fishing as sports tourism is a great income generator. Just hiring a decent fishing vessel for four days, three nights would cost between RM18,000 and RM20,000. In fact, members of the Chinese Anglers Club from China chartered a private plane just to fly to Miri and take part in the 2014 event,” he said during a press conference on the 10th MCIDSFT here yesterday, where Miri Resident Antonio Kathi Galis who is also Miri Tourism Task Force chairman, Miri Anglers Club (MAC) president Ting Thung Hing and vice-president Aaron Abel Donald who is also MCIDSFT organising chairman were among those present.

Lee said one of the business opportunities that could be capitalised upon would be the building of modern fishing boats, seeing that currently there are only 10 such boats available in Miri and Bintulu Divisions which could only accommodate 15 people each.

“MCIDSFT not only promotes deep-sea fishing and sports fishing tournaments, but it also provides opportunities for anglers to explore the potential in Malaysia.

“The event also helps boost the local economy, not only for those directly involved in sports fishing, but also those in related industries like fishing equipment suppliers as well as sport tourism players and accommodation providers,” he stressed.

Lee commended MAC and other co-organisers for their perseverance in organising the MCIDSFT, of which the idea was mooted by him and he had been facilitating the provision of government grants to the event.

The prizes for those in sixth to 15th place had been increased from RM500 to RM800, while RM3,000 will be set aside as the special prize (champion/biggest fish).

The tournament is supported by the Ministry of Tourism, Arts and Culture, Sarawak Tourism Board and Malaysian Tourism Board.