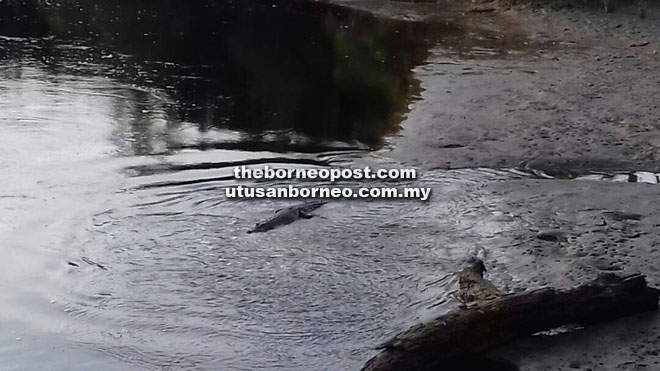 Photo shows the crocodile spotted by the riverbank at Sungai Telong in Suai, Niah.

MIRI: A fishing enthusiast abandoned plans to check on his fishing net at Sungai Telong in Suai, Niah yesterday after he spotted a crocodile near the riverbank around 7am.

Oliver Whayne, 27, who works at a nearby estate, said he fishes from the same spot almost every week.

“Most people, especially fishermen from a village nearby, always come here for fishing or setting up their nets as there are a lot of fish and prawns here,” he said when contacted.

“Some of them also come to catch mangrove crabs.”

Oliver explained that as he was about to check a net he set up on Tuesday he spotted the crocodile lurking near the riverbank.

“I heard from other fishermen that there are a lot of crocodiles in this area but it was my first time seeing one too close to the riverbank,” he said.

Although he had never heard of crocodile attacks in the area, Oliver decided to quickly flee but not before taking a quick photograph.