Fisherman still without boat licence after years of waiting 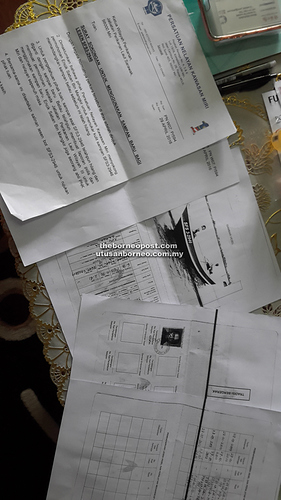 The documents to support Saban’s application for a boat licence.

MIRI: Saban Mangkit has been itching for years to go back to catching fish, but dare not because the state Marine Fishery Department has yet to reissue a boat licence to him.

Until today, the department has yet to reissue him a boat licence even though he had done all the paper work, including lodging a police report.

Miri Fishermen Association, of which he is a member, had also helped by writing a supporting letter to the Department, but nothing came out of it, too.

“I hope the authority can reissue a boat licence immediately as I have not been able to go out to sea to fish for quite a long time,” he told The Borneo Post yesterday.

Saban also hoped Assistant Minister for Land and Air Transportation and Safety Datuk Lee Kim Shin, who is also Senadin assemblyman, could assist as the matter had affected his family’s livelihood.

He has a new boat, but without a licence, he dare not go out to sea.

Currently, he is helping his wife, who is a hawker at a wet market.