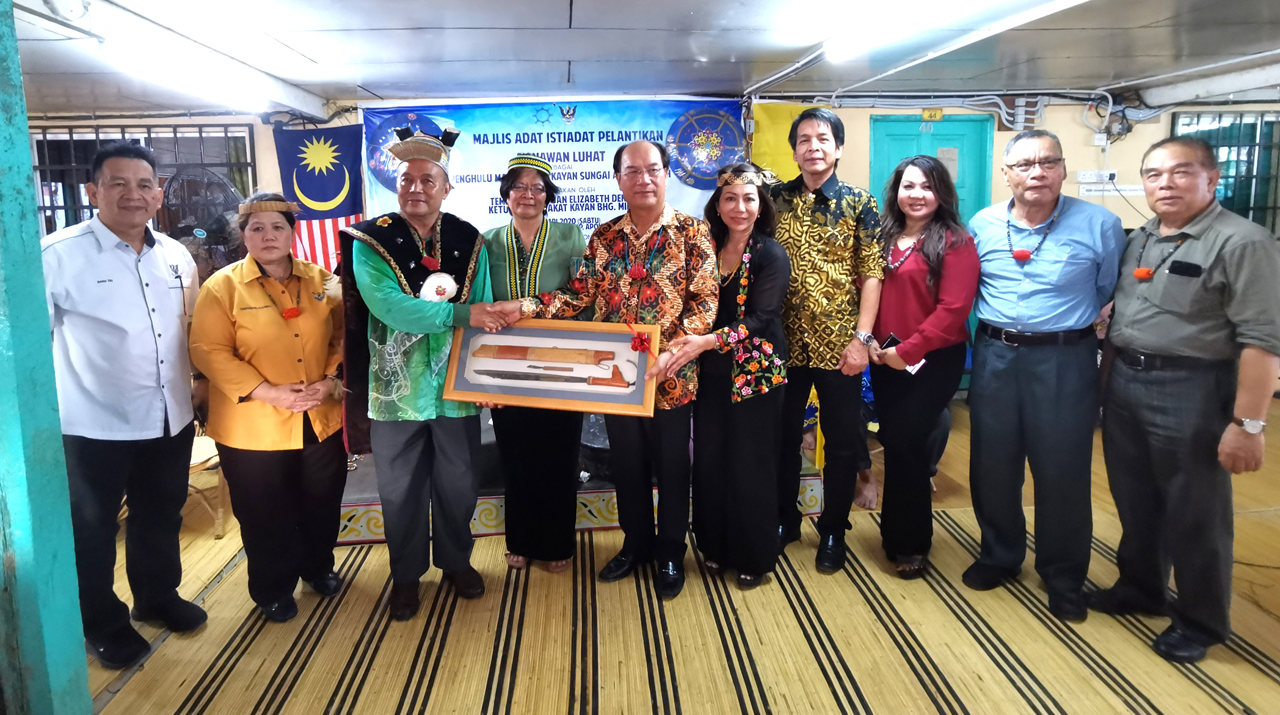 Gerawat (sixth right) receives a memento from Nawan (third left) for officiating at the event.

MIRI: The appointment of the first degree holder among them as Penghulu is a historic moment for the Orang Ulu community in Sarawak.

Mulu assemblyman Dato Gerawat Gala said the appointment of Nawan Luhat as Penghulu was a timely recognition of his exceptional leadership qualities.

“The appointment of Nawan Luhat as a Penghulu is something historic for the Orang Ulu in Sarawak as he is a university graduate.

“This is an improvement and achievement as well as inspiration to us Orang Ulus,” he said at the local Kayan adet ceremony for Nawan on his appointment as Penghulu for Apoh and Tutoh region at Long Atip, Sg Apoh recently.

“We need ‘Ketua Kaum’ (village chiefs) and ‘Ketua Masyarakat’ (community leaders) of high calibre in line with future development patterns and changes as well as new problems and challenges.

“They must have the leadership skills, maturity and wisdom to perform their duties which are fairly arduous and challenging.

“Having a graduate as Penghulu is also an indication that Orang Ulus are progressive in their Adet,” he said.

On another matter, Gerawat said that the state government had set up the Highland Development Agency (HDA) to accelerate development in Baram, with an allocation of RM1.5 billion for two years (2019 and 2020) in addition to the annual development allocation by the GPS government.

He said of the RM1.5 billion allocation, RM1.2 billion would be spent on upgrading 19 roads, RM275 million for 21 water plants and RM25 million for two power stations.

“The support and cooperation of our leaders and people in Baram is crucial for the implementation of HDA projects as well as ‘projek rakyat’ (people’s projects) implemented by departments,” he added.

On a relevant matter, Gerawat said unity and harmony among the longhouse residents would be affected if they had two committees – the Village Security and Development Committee (JKKK) and the Federal Village Community Management Council (MPKKP).

Realising this, he said all village heads and community leaders in Sarawak had unanimously rejected the setting up of MPKKP.