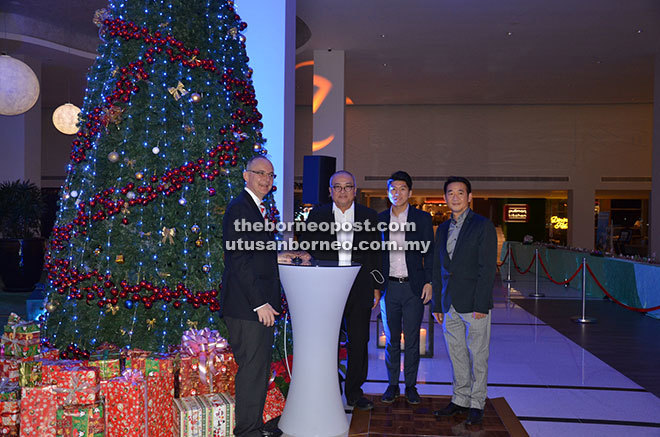 General manager Wiess (left) pressing a button to light up the Christmas Tree at Pullman Miri Waterfront, as the new hotel celebrates its first Christmas with pomp and merriment.

MIRI: Pullman Miri Waterfront is bracing for its first ever Christmas celebration after the hotel’s soft opening in April, followed by a grand opening in September.

Year-end festivities were launched with lighting of the Christmas tree by general manager Michael Weiss, which was witnessed by some 100 invited guests, hotel guests and the press corps. Also present was Mayor Adam Yii. The audience were also treated to carolling by carollers from St Columba’s Church.

The highlights of the festive promotion include a Christmas Eve buffet dinner, Christmas day brunch and dinner while there will be a New Year Eve dinner and countdown to usher in the year 2017.

Tickets for Christmas and New Year Eve are available now. Take advantage of the current offer of buying ‘nine tickets free one’ from now until Dec 20.

There is something for everyone: the little ‘uns from three to 12 years old can have a good time on their own at a Children Christmas Party on Dec 11 from 11am to 4pm at the grand ballroom. Parents need to purchase tickets in advance, priced at RM58.

Besides the children’s menu, activities include numerous game stalls, a giant inflatable playground, cartoon movies, face-painting, drawing, mascot such as superheroes, Pikachu and finally, the appearance of Santa Claus making his rounds of goodies.