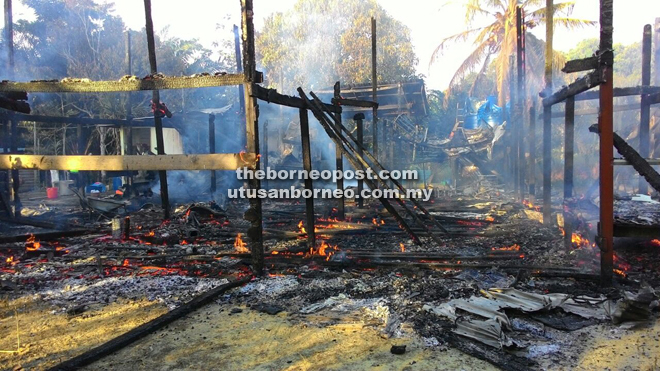 What’s left of the double-storey wooden house that was gutted on Tuesday afternoon.

BINTULU: A double-storey wooden house in Kampung Tengah Nyalau was razed to the ground on Tuesday afternoon.

According to Bintulu Fire and Rescue Department (Bomba) station chief Di-Hatta Gobel, they received a distress call at 4.45pm and rushed four personnel to the scene.

“Upon the firemen’s arrival, the house was already almost destroyed,” he said, adding that no injury was reported.

In an unrelated case, one individual was killed and two others seriously injured when the car they were travelling in hit a tree along Tanjung Kidurong Road on Tuesday evening.

The male driver was trapped in the driver’s seat while one of the female passengers died on the spot.

Bomba was alerted of the accident at 7.15pm, and six firemen arrived at the scene at

In another accident at Mile 18 Bintulu-Miri Road, an Indonesian man was trapped in the driver’s seat of the pick-up truck he was driving.

He was later pronounced dead by medical personnel.

Bomba received the distress call at 7.34pm and despatched four firemen to the