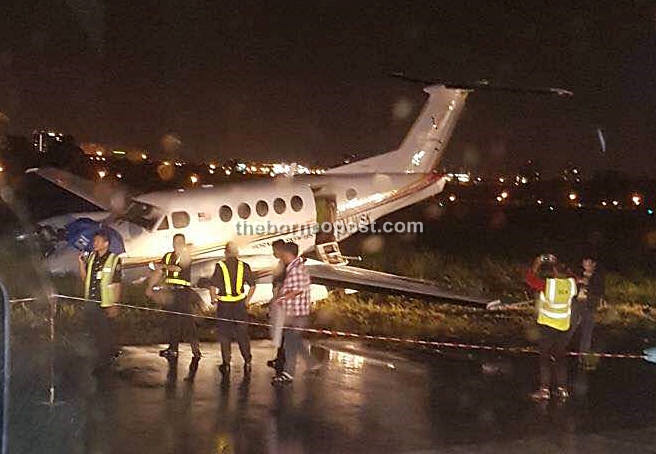 Officials attempting to clear the plane from the runway at Kuching International Airport yesterday.

MIRI: Minister of Welfare, Community Well Being, Women, Family and Childhood Development Dato Sri Fatimah Abdullah praised the skills and professionalism of the pilot flying the plane she was travelling in that skidded off the runway during landing at Kuching International Airport yesterday.

The pilot of the Beechcraft light aircraft had taken every possible measure to minimize injury to the seven onboard the plane during the unforeseen incident, she said.

Fatimah, who was travelling from Mukah to Kuching with her entourage of four as well as a technical crew, said the weather was initially good and it was a smooth journey until they arrived in Kuching.

“As the plane approached Kuching International Airport, the heavy downpour and strong wind caused the flight to become a bit rough.

“Upon touching down, the plane, perhaps due to the slippery runway, skidded away to the side and off the tarmac,” she told reporters after a function at SMK Agama Miri today.

Nonetheless, as she spoke of the shocking experience, Fatimah thanked Allah for the safety of all passengers and the pilot’s ability in handling the situation.