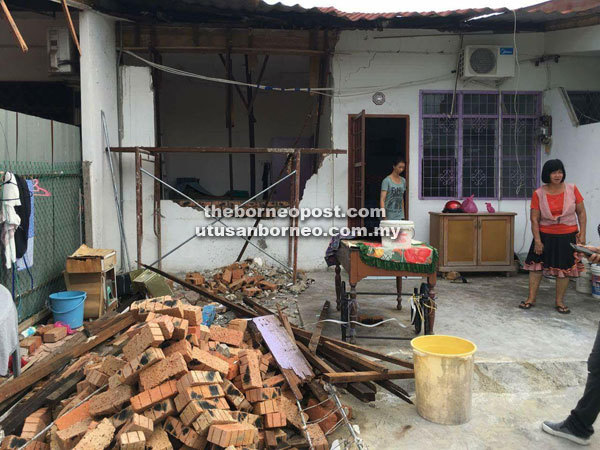 Teo (left) and her mother at their front yard which was ploughed down by a lorry.

SIBU: Three members of a family decided yesterday to cut ties with a man as they fear he will bring harm to them.

Problems started brewing ever since the 33-year-old man with several criminal records returned home during the Chinese New Year this year, as they constantly received threats from strangers who hurled lit

firecrackers into the house compound and used a lorry to bring down the front portion of their house.

The man’s mother and two sisters decided to sever their relationship with him so that they could live in peace.

The man has been living in Miri for 10 years and only returned home to visit his family members at Poh Yew Road during the Chinese New Year this year.

According to his elder sister Teo Siew Ling, they had since then been harassed four times, beginning in May.

The first incident occurred when strangers hurled lit firecrackers to their house compound to frighten them.

Although Teo could not remember the dates of the first three incidents, she said they had suffered enough mental torment.

She said they had been calling his brother to know what was happening but to no avail.

She said after the first incident, their front gate was ploughed down by a lorry during the same month.

The third incident, she added, occurred in June when the strangers came back to pull down their gate again with their vehicle.

“We saw them coming. We rushed out, the strangers left. Unfortunately, we could not see their faces clearly.”

Teo said the worst incident occurred on Oct 4 when the strangers ploughed their lorry into the front of their house, bringing down the roof of the car porch and a front wall.

“We have had enough of these torments. We believe they have something to do with my brother, but how we do not know. We decided to cut ties with him now – me, my mum and my younger sister,” the elder sister elaborated.

Since then, she said she and her sister had started repairing the house in stages as they lacked money.

On the damage to their house on Oct 4, she said they had lodged a police report, and the police were now probing.

“We shall wait for the outcome of the police investigation to confirm the reasons for the repeated harassment.”

She said they decided to lodge the police report because the three of them lived by themselves in the house, and they were scared.

She said her father was in Sarikei and did not return that often.