Entri calls Marudi farmers to bunch up for Nafas branch 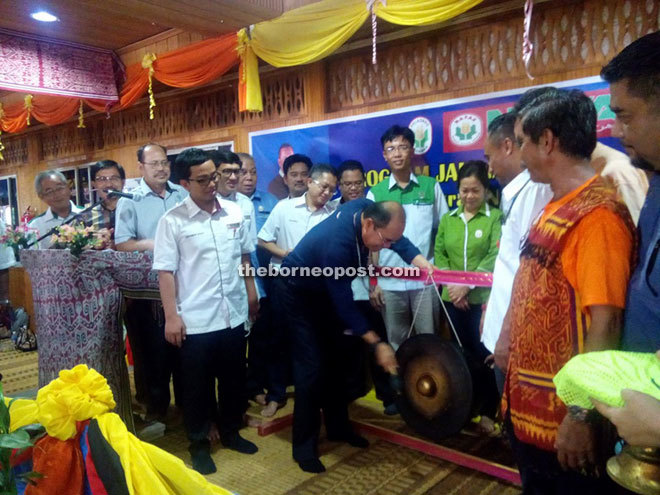 Entri hits the gong to open the one-day programme, organised by Nafas and Sarawak Farmers Organisation.

MIRI: The people of Marudi will benefit from the establishment of the National Farmers Organisation (Nafas) as a further boost to their agriculture-based economy.

“We will set up farmer units in each area of Marudi constituency and at a later part, establish Nafas branch in Marudi so that agriculture can be stepped up for the people,” Entri said in officiating at a ‘Jalinan Mesra Peladang’ programme at Rumah Engkas, Sungai Malang in Beluru, Bakong on Saturday, conducted by Nafas and Sarawak Farmers Organisation.

According to Entri, Marudi farmers can reap the benefits from the establishment of Nafas in the near future with the national body assisting in farming technology.

He urged longhouses folk to set up farmer units in each of their settlements to boost agriculture produce.

“We are yet to have our own Nafas branch in Marudi but to set it up here, we must first establish farmer units,” he said.

Entri, who is also Marudi assemblyman, said farming was a key economic activity to improve the community’s living standard that would involve idle land and those under Native Customary Rights (NCR).

He urged farmers in the constituency to grab the opportunity of commercial farming on their idle land.